Imagine a doctor is trying to figure out why a patient had a heart attack. The patient had a lot of risk factors. He ate too many cheeseburgers, smoked, was a couch potato, and had the wrong bacteria in his gut.

You read that last risk factor right. If the results of a recent study hold up, the bacteria in his gut might be another risk factor for a heart attack.

The researchers in the study found that people with one group of bacteria had a lower risk of developing atherosclerosis than people with a different set of bacteria.  This hardening of the arteries can cause a heart attack or stroke.   So which bacteria they had in their gut affected their risk for a heart attack.

Scientists not only identified which bacteria were good or bad, they also figured out why they had the effects they did.  It turns out that the bacteria in patients with more hardened arteries had more genes that caused inflammation. Long term, inflammation can lead to different diseases including atherosclerosis. Bacteria in healthy people had genes that protected them from inflammation by soaking up dangerous chemicals.

All of this tells us that our genes and lifestyle aren’t the only things important in figuring out our risk of disease. The genes of the bacteria inside of us are also important. In other words, the microbes in your gut can have a big effect on your health, even in areas that you don’t think of being controlled by your gut.

If we know some bacteria help prevent disease we might be able to put those bacteria in people. Or if we know which genes and molecules are helpful, we can use that information to design new medicines that mimic their effects. This is why it’s so important we learn more about our smallest neighbors.

When people think of bacteria they probably think of germs that make them sick. But most bacteria aren’t harmful and many are actually helpful.

Bacteria live all around and inside of us. More than a hundred trillion bacteria live in just our guts. That means there are more bacterial cells in our guts than human cells in our entire bodies!

Rather than being a nuisance, these bacteria are actually helpful and necessary. We need them to be able to get all of the nutrients out of our food, they can help shape our immune system, and they can even protect against some diseases.

It might sound gross, but scientists can use the DNA in poop to figure out which bacteria live in your gut. Scientists did this to compare the bacteria in healthy people and people who have had heart attacks or strokes because of hardened arteries. It turns out patients with hardened arteries have more bacteria from a group called Collinsella.

Scientists were also able to identify bacteria that protected people from hardening of the arteries.  The people who were at a lowered risk had bacteria that had more genes for things called antioxidants. These are the famous chemicals in fruits like blueberries that help the body fight damaging molecules called free radicals. Free radicals can cause a lot of damage to cells and are linked to things like cardiovascular disease and atherosclerosis.

Just like which genes people inherit from their parents, a person doesn’t get to decide which bacteria end up in their guts. The bacteria in their gut start to appear during birth, and right after, from their mother, their environment, and what they eat.

Since most family members tend to live together, in the same environment, they usually have similar bacteria inside of them. But a person’s environment isn’t the only thing that determines which bacteria they get, their genes play a part too.

Like this cheeseburger, the bacteria in your gut might be a risk factor for a heart attack.

Gut bacteria can lead to more hardening of the arteries and so a higher chance of a heart attack.

People can’t do much about genes they inherit that put them at a higher risk for getting a heart attack.  They can take medicines that deal with their genes but they can’t change the genes themselves.  This is not true of bacterial genes.  These can be changed by changing out the bacteria.

One way to do this is a technique called a fecal transplant. Yes that is exactly what it sounds like.

Not many people would be willing to go through this to lower their heart attack risk.  Suddenly a few less cheeseburgers and a walk now and then sounds more doable.  But there are some diseases that are best treated with a fecal transplant.  One of these is an infection that can happen after taking antibiotics.

Antibiotics kill many of the helpful bacteria in the gut. Usually these bacteria return without any problem, but sometimes a pathogen called Clostridium difficile can invade the gut before the good bacteria can make a comeback. This can cause a life-threatening infection that might only be able to be treated with a fecal transplant.

Even if fecal transplants aren’t the final answer to all of our health problems, learning about the bacteria inside might still give us new ways to treat and prevent heart attacks. The more we know about what bacterial genes are helpful the better able we might be to design treatments that work with our bacteria to fight diseases. Or that can keep harmful bacteria in check.

Not so long ago scientists had to be able to grow the bacteria from the gut, or the ocean, or the soil, or wherever, to figure out which species were there. But it can take a long time to figure out how to do that, and there are many, many kinds of bacteria out there that we still can’t get to grow in the lab.

Scientists have managed to find a way around this.  Instead of trying to grow bacteria in the lab, they just look at the DNA in a sample.   Then they use a computer to unscramble who the DNA belongs to.

This is sort of like trying to piece back together thousands of shredded books.  The first step is to match up the words on the bits of paper to make whole sentences and paragraphs. Then they can either match these sentences to known books or, if there were a bunch of the same copies in the pile, they might be able to recreate the whole book.  To do this, they would get a piece of paper with the end of one sentence and beginning of another and then another piece of paper might have the beginning of that same sentence. They could match up those bits of sentence like pieces of a puzzle.

Scientists can do the exact same thing with the bits of DNA in poop.    Just like a book, DNA is just a string of letters (although it has four instead of 26).    Each species has their four DNA letters ordered in a certain way.  What this means is that each species has a specific sequence of those letters in one region of their DNA, like a sentence particular to one book, or a signature.

Unlike the book example, there usually isn’t enough DNA just in the sample to match together. Scientists use a technique called PCR to make lots of copies of the DNA. This is like using a photocopier to make more copies of our bits of shredded books.

Scientists can choose to make lots of copies of a species-specific, signature, region of DNA and compare it to species whose DNA sequence is already known. This is like getting a paragraph and comparing it to a known book.

Alternatively, they can look at all the DNA from every species in a sample and recreate each species' entire set of DNA from scratch. This is like recreating the book from shredded multiple copies.

Scientists were able to use these techniques to not only know which bacteria were in the guts of healthy people versus sick patients, but also compare which genes are different in the bacteria of healthy and sick people. By doing these comparisons they figured out that bacterial genes for making antioxidants are important in preventing cardiovascular disease. And genes that make more peptidoglycan can cause hardening in arteries.

We are just at the beginning stages of learning how our microbes help us live healthier lives. There are a lot more bacteria in our guts to study, and a lot more genes they have that might help us fight disease.

These little bacteria can cause a deadly disease if they colonize your gut. The only treatment in some cases is a fecal transplant. 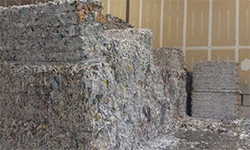