How is it possible that I have blue eyes when my father has brown and my mother green? My grandma on my dad's side had blues and ONE of my uncles does, as well, but I don't know how I got the gene for blue if my Dad's genotype is Bb and my mother's is Bg.

-A high school student from Illinois

A brown eyed dad and a green eyed mom can have a blue eyed child because there are at least two eye color genes. Because of this, it is possible for both green and brown eyed parents to be carriers for blue eyes.

And as carriers, they each can pass down blue eye genes to their children. Let's go into a bit more detail about how all of this works. We'll also do Punnett squares for the two most likely possibilities in your case to figure out the chances of your parents having a blue eyed child. 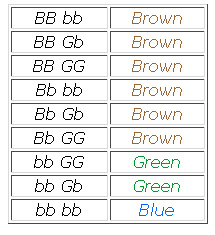 A couple of things might seem weird here. First, there are two separate genes and yet B from one gene is dominant over G from another gene.

Eye color happens because of the amount of the pigment melanin found in the eye. Not anywhere in the eye but in a very special place, the stroma of the iris.

Lots of melanin here gives brown eyes and less melanin gives green. Little or no melanin in the stroma of the iris gives blue eyes.

OK, so now we see why brown is dominant over green. And why blue is recessive to both. But we still haven't explained your situation.

We can figure this out from noting something else in the table--all the eye colors have two versions of each gene. There are two copies of OCA2 and two copies of gey in each case.

This is because we have two copies of most of our genes, one from mom and one from dad. It is this fact that allows for a brown eyed dad and a green eyed mom to have a blue eyed child.

Then they have brown eyes. But half of the time they will pass the blue version to their kids. And if the other parent passes the b version of OCA2 as well, then the child will not have brown eyes. This all works for the gey gene too.

So in your case, the easiest way to explain your blue eyes is if both your mom and dad are carriers for blue eyes. Your mom is most likely bb Gb and your dad is either Bb Gb or Bb bb (we can't tell the difference). These are written as the first pair of letters from OCA2 (the brown-blue gene) and the second pair from gey (the green-blue gene).

So each parent gave a b from OCA2 and a b from gey. The end result is that you are bb bb which is blue eyes.

Let's figure out how likely it was for you to end up with blue eyes. To do this, we'll set up two Punnett squares, one for each of your dad's possibilities.

The way a Punnett square works is you make a table. We'll do an easy one first with just OCA2 (the brown or blue eye gene). The first step is to put your dad's two possible gene versions on the top like this:

Since we are saying your dad is a brown-eyed carrier of blue eyes, he has a B (brown) and a b (blue) version of OCA2. The next step is to put your mom's gene versions on the side of the table like this:

As you can see, in this example, I put your dad's brown eyes on top (Bb) and your mom's blue eyes (bb) on the side. Remember, your dad and mom only contribute one version of OCA2 each. Your dad can give either a B or a b, not both. The Punnett square gives you all four possibilities of your dad and mom's combinations.

The next step is to fill in each square with the letters from the top or side to figure out what is possible. For example, in the first square, since there is a B from your dad and a b from your mom, a Bb goes in like this:

This represents a brown eyed carrier of blue eyes. You then fill in the rest of the square like this:

From this, you can figure out that your parents had a 50-50 shot of having brown-eyed kids (Bb). Note that all the brown eyed kids will be carriers for the blue eyed version of the gene, b.

Now, to add the green gene, it gets more complicated. Each of the two genes is independent of each other so you need to figure out all of the possibilities your parents could have. Your mom will be bb Gb. Your dad could be either Bb Gb or Bb bb.

If your dad is Bb Gb, then the square will look like this:

You do the same thing as before and combine the boxes. The first box would be Bb GG, a brown-eyed carrier of green eyes. If we fill in all of the possibilities, we get:

From this, we can figure that if your dad was a carrier for green eyes, then your parents had a 2 in 16 (or 1 in 8) chance of having a blue eyed child. If instead your dad is Bb bb, then the Punnett square would look like this:

In this case, each child of your parents has a 4 in 16 (or 1 in 4) chance for blue eyes. So there you have it. Sorry it was so long but now you know how it is possible for a brown eyed dad and a green eyed mom to have a blue eyed child. And the odds of it happening.