And What He Reveals About Our Genetic Past

Many people have trouble believing that chromosome number can change and stay changed in a species. Their first thought is often of Down syndrome or the other problems that usually come with missing or extra chromosomes. It can be hard to imagine how a living thing could end up with a new chromosome number without these problems.

And yet it happens all the time in creatures as varied as yeast, corn, butterflies, voles and even mice. And now it has been seen in people.

In a recent article, a doctor in China has identified a man who has 44 chromosomes instead of the usual 46. Except for his different number of chromosomes, this man is perfectly normal in every measurable way.

His chromosomes are arranged in a stable way that could be passed on if he met a nice girl who had 44 chromosomes too. And this would certainly be possible in the future given his family history.

But why doesn't he have any problems? A loss of one let alone two chromosomes is almost always fatal because so many essential genes are lost.

So he has almost all the same genes as any other person. He just has them packaged a bit differently.

This is an important finding because it tells us about a key genetic event in human prehistory. All the evidence points to humans, like their relatives the chimpanzees, having 48 chromosomes a million or so years ago. Nowadays most humans have 46.

What happened to this 44 chromosome man shows one way that the first step in this sort of change might have happened in our past. Scientists could certainly predict something like this. But now there is proof that it can actually happen.

Note added in Proof: Here are some older papers that I missed that have very similar findings:

And the current one:

So how did this man end up with 44 chromosomes? It is a story of close relatives having children together. And a chromosomal rearrangement called a balanced translocation.

A balanced translocation is when one chromosome sticks to another. Because no genes are lost in this process, it usually doesn't have any effect. Until these folks try to have kids that is.

Usually around 2/3 of pregnancies involving one person with a balanced translocation will end in miscarriage. This has to do with how chromosomes separate when eggs and sperm are made. This process is called meiosis.

This is where the problem starts for people with a balanced translocation. They have one unpaired chromosome and a pair with an extra chromosome. Here is what can happen in this situation: 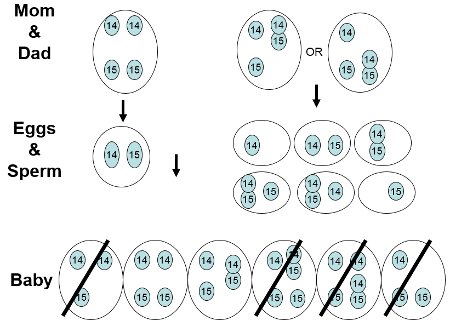 The top row represents two potential parents. The parent on the right has a balanced translocation. There are two possible ways for the fused chromosome to line up.

In the figure, only two chromosomes are shown. Numbers 14 and 15 were chosen because these are the two that are fused in the 44 chromosome man.

The parent with the balanced translocation can make 4 different kinds of sperm or egg (the second row). As the figure shows, when the eggs and sperm combine, 1/2 of the time the fetus ends up with an extra or missing chromosome. Unless this chromosome is the X, Y or number 21, the usual result is miscarriage or being born with severe problems.

In this case it would almost certainly result in miscarriage. In fact, the 44 chromosome man's family has a long history of miscarriages and spontaneous abortions.

In this case, both parents are first cousins and they share the same translocation. When these parents try to have kids, they run into the same kinds of problems that can happen with one balanced translocation. Except that the problems are doubled. This makes for the many possibilities outlined below:

This very complicated table shows the 36 possible outcomes when two parents with the same balanced translocation attempt to have a child.

In this representation, the father's possible sperm are shown on the top and the mother's eggs on the side. Each pregnancy has only an 8 in 36 chance for success. And 1 out of 36 would have two of the same balanced translocation (the circled possibility).

Theoretically the 44 chromosome man should have fewer problems having children than his parents did. As this figure shows, there are no unpaired chromosomes when he and a woman with 46 chromosomes have children. But all of their kids would have a balanced translocation:

So this is how he came to have 44 chromosomes. This might also be how humans started on the road to 46 chromosomes a million or so years ago.

Balanced translocations and Down syndrome

No chromosome 15 but perfectly fine.
A partial karyotype of a Chinese patient with only 44 chromosomes.

Humans and chimpanzees have a different number of chromosomes. Humans have 46 while chimpanzees (and many other great apes) have 48.

What scientists don't know yet is how 46 chromosomes came to win out over 48. As the 44 chromosome man shows, this sort of change starts out pretty rare. Right now having this particular set of chromosomes is probably a 1 in 7 billion sort of thing.

There are a couple of obvious ways that 46 chromosomes might take over. One is if there was some sort of advantage to having this number of chromosomes.

There is almost certainly no advantage in how the DNA is packaged. If anything, having a different number of chromosomes hurts someone in terms of having the most babies possible.

It might be that where the two chromosomes fused together, some new helpful gene was created. Maybe one that let our ancestor communicate more effectively or walk upright. Unfortunately, there is no evidence to support this.

An alternative is that dumb luck allowed the 46 chromosome humans to win. Perhaps people with 46 chromosomes were in an isolated community somewhere and the rest of humanity was wiped out. Certainly humanity has had near death experiences before. The most recent one was probably 75,000 or so years ago.

If by chance 46 chromosome humans were spared, then we have our current number of chromosomes by chance. And if something similar were to happen in the near future and only descendants of the 44 chromosome man survived, then humans would end up with 44 chromosomes.

A video discussing evidence that human chromosome 2 is a fusion of two chimpanzee chromsomes.

An early balanced translocation may explain why humans have two less chromsomes than chimps.