How Blue Eyed Parents Can Have Brown Eyed Children

Eye color is much more complicated than is usually taught in high school (or presented in The Tech’s eye color calculator).  There we learn that two genes influence eye color.

The model cannot, for example, explain how blue eyed parents can have a brown eyed child.  Yet this can and does happen (although it isn’t common).

New research shows that the first gene is actually two separate genes, OCA2 and HERC2.  In other words, there are two ways to end up with blue eyes.

Normally this wouldn’t be enough to explain how blue eyed parents can have a brown eyed child.  Because of how eye color works (see below), if one gene can cause brown eyes, it would dominate over another that causes blue.  In fact, that is what happens with green eyes in the older model.  The brown gene dominates over the green one resulting in brown eyes.

The reason these two genes can explain darker eyed kids with lighter eyed parents is that the two genes need each other to work.  And that the blue versions are broken genes.  Here is what things look like:

The key is that if someone makes a lot of pigment in the front part of their eye, they have brown eyes.  And if they make none there, they have blue.

Part of the pigment making process involves OCA2 and HERC2.  A working HERC2 is needed to turn on OCA2 and OCA2 helps to actually get the pigment made.  They need each other to make pigment.

So someone with only broken HERC2 genes will have blue eyes no matter what OCA2 says.  This is because the working OCA2 can't be turned on so no pigment gets made.

And the opposite is true as well.  Someone with broken OCA2 genes will have blue eyes no matter what the HERC2 genes are.  Turning on a broken pigment making gene still gives you no pigment.  You need a working HERC2 and a working OCA2 to have brown eyes.

Because the two genes depend on each other, it is possible for someone to actually be a carrier of a dominant trait like brown eyes.  And if two blue eyed parents are carriers, then they can have a brown eyed child.  Genetics is so much fun!

So all you light eyed parents with dark eyed kids, stop asking those paternity questions (unless you have other reasons to be suspicious).  Darker eyed kids are a real possibility that can now be explained with real genes.

Two of the most important genes in eye color are OCA2 and HERC2.  Both come in versions that can cause blue eyes.  And they need each other to work. (In genetics, a relationship like this is called epistasis.)

These two facts provide one explanation for how blue eyed parents can have a brown eyed child.  To understand how, a little genetics refresher course is in order.

These genes can come in different versions (or alleles).  For the sake of this discussion, we will say that OCA2 comes in brown (O) and blue (o) versions.  Reality is actually a bit more complicated and this will be dealt with in the second article of this series.

HERC2 also comes in two different versions, brown (H) and blue (h).  Since people have two copies of each gene, there are nine different possible genetic combinations.  They are:

These different combinations give the following eye colors:

Looking at the table, it quickly becomes obvious that any time there are two lower case h’s or two lower case o’s, a person has blue eyes.  As will be discussed in the next section, this is because HERC2 and OCA2 need each other to have an effect and the blue versions of each gene are broken.

The easiest way to figure out what possible eye colors their kids might have is with a Punnett square.  The first thing to do in a Punnett square is to array dad’s possible sperm cells across the top of the table and mom’s eggs down the left hand side like this:

Shown below is a simplified version of the table in which duplicate sperm and eggs have been eliminated:

The next step is to fill in the squares with the possible genetic combinations.  Filling in the first one immediately gives a brown eyed child:

Here are the rest of the possibilities:

Each child has a 25% chance of having brown eyes and a 75% chance of having blue eyes.  This is simplified since the other eye color genes (like those that influence green eyes) are being ignored.  But it does mean that brown (or green or hazel or…) eyes are a definite possibility for these blue eyed parents.

Also note that the child in the lower right hand corner no longer carries a brown eye gene.  They will not have a brown eyed child as easily as their parents!

And the chances could be even higher with oo HH and OO hh parents.  This is what their Punnett square would look like:

All of their kids would have brown eyes!  (The table has been simplified to eliminate duplicate gene combinations.)

(Also, things are actually a bit more complicated than what I have shown here because HERC2 and OCA2 are so close together on the same chromosome.  Go to the end of the article if you’d like to learn what effect this has.)

Again this is understandably a bit confusing since these parents are technically carrying a dominant brown trait.  To understand this, we need to get into the nitty gritty of how eye color and these two genes work. 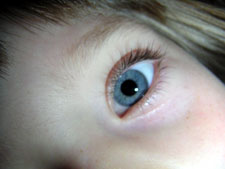 She could be carrying a brown eye gene!

Why OCA2 and HERC2 Need Each Other

OCA2 is one of the key genes in determining how much pigment gets made.  So it makes sense that if both OCA2 copies are broken, someone would have blue eyes.  Because they can’t make a lot of pigment.

Most of the HERC2 gene has very little to do with eye color.  There is one small section in the middle, though, that controls whether OCA2 is turned on or not.

If this part of HERC2 ends up broken in both copies, then OCA2 can’t get turned on.  And if OCA2 is off, no pigment gets made.  It is like the OCA2 gene is broken.

This is what happens when blue eyed parents carry a brown eye gene.  If they have blue eyes because of a broken HERC2, then they might still have an OCA2 that works.  And if they have a broken OCA2, they might have a working HERC2.

Here is how to think of it in terms of these two parents passing on their genes to the next generation:

This light bulb/switch relationship is called epistasis in genetics.  This is simply a fancy way of saying that one gene depends on the other.  And that if one breaks down, both will no longer have an effect.

So now science can finally explain one mystery of eye color.  Or at least propose one of the ways blue eyed parents can have brown eyed kids.

The next article will deal with eye colors other than the big three.  And talk a bit about why some hair colors tend to have certain eye colors.

OCA2 and HERC2 are Linked

An interesting twist to this puzzle is the fact that HERC2 and OCA2 are so close together on chromosome 15.  What this means is that versions tend to travel together.  And this affects the combinations of kids that any two parents can actually have.

If we assume the OCA2 and HERC2 genes were far from each other, we’d get the following Punnett square:

The results are a 9 in 16 chance for brown and a 7 in 16 chance for blue.  This assumes that any of four combinations of the two genes is possible.  This is true for genes that are far apart or on different chromosomes.  This does not tend to be true if genes are really close together like OCA2 and HERC2.

Imagine that these two parent’s chromosomes actually look like the ones on the right.  Because of how their alleles (gene versions) happen to be arranged, their real Punnett square would look like this:

Now blue is less likely.  And all the blue eyed kids wouldn’t be carrying a brown eyed gene anymore!  And if the alleles were arranged differently, you’d get different odds.

Many people become confused at this point because they think that this situation should happen in every case where two genes are on the same chromosome.  It doesn’t because of something called recombination.  That is a story for another day…