Does the existence of Mitochondrial Eve mean there was a time on Earth when there was just one woman?  Does Y-Adam mean the same thing for men?

No they don’t.  There were almost certainly plenty of women around when Mitochondrial Eve walked the Earth and plenty of women had come before her.  Same thing with men and Y-Adam.

Mitochondrial Eve is simply the last woman we can trace our maternal lines back to.  In other words, she is our mother’s mother’s, etc. all the way back a few hundred thousand years.

All the other women alive at the time eventually had their maternal lines end.  Either there was a generation with all sons or the daughters had no surviving daughters or whatever.  The descendants of most of these women still walk among us; they are just invisible to the type of testing we can do to look back so far in time.  Again, this all goes for men and Y-Adam too.

What this means is that as we look at more and more people’s DNA, the identity of Mitochondrial Eve and Y-Adam will probably shift back in time.  Maternal and paternal lines that were missed will be included and then we can trace all of our lines back further and further in time.  In fact, this recently happened with Y-Adam.

A man in South Carolina was found to have a paternal line so different from everyone else’s that he represents a previously undiscovered branch back into our past.   His DNA changed Y-Adam from a man who lived between 60,000 and 142,000 years ago to a “man” from 237,000 and 581,000 who may not yet have even been human!

We can’t trace most of our DNA very far back at all.  This is because something called recombination jumbles up our DNA between each generation (click here to learn more).  After four or five generations, the DNA is too tangled to trace back anymore.

There are two pieces of DNA, the Y chromosome and mitochondrial DNA (mtDNA), that don’t recombine.  This means we can trace these back thousands of generations.

The Y chromosome is passed from father to son.  We use this DNA to identify Y-Adam.

We use mtDNA to identify Mitochondrial Eve.  This DNA is passed from mother to child (both sons and daughters).

What all of this means is that the existence of a Mitochondrial Eve or a Y-Adam is inevitable because of how each of these DNAs is passed down.  Let’s go over a couple of examples to see why.

Imagine we have our first Y-Adam, the one from 60,000-142,000 years ago.  What we will do is trace his Y chromosome through a couple of generations.  As I do this, I will show the X and the Y chromosomes.  Remember, there are another 22 other pairs being passed down too.

Imagine he has three sons and two daughters like this:

Notice that I have made the mother of Y-Adam’s children have purple X chromosomes (she has two because she is a woman) while Adam has a black X and a red Y.  I have done this to make tracking the chromosomes simpler.

What we can see first off is that for Y-Adam’s Y, two lines are gone.  His two daughters did not get his Y chromosome and so we can’t use their lines to trace things back to him.  If all three sons died at this point, we could not trace Y-Adam any more (assuming he had no brothers and his dad had no brothers or that his dad’s brother’s had no sons or…).

Notice that no one in the next generation has a red Y chromosome.  One of his sons died before he could pass on the Y and his other two sons had daughters. (You can also see recombination happening in Adam’s daughter’s children’s X chromosome.)

This paternal line has died out but some of Y-Adam’s DNA is still in all of his grandchildren (we can’t see it in his son’s daughters because we aren’t including the other 22 pairs of chromosomes).  If we looked back using just the Y chromosome though, we would never see him.

Here the paternal line lives on through the son on the far left.  He had two sons who each share their Y chromosome with their grandfather.  If these sons had sons and some of those sons had sons and this kept happening, then this line could go on forever.

This is what happened in Y-Adam’s case. There was at least one son to pass on that red Y chromosome all the way up to the present day, generation after generation.

Every other living male alive at the time of Y-Adam had something somewhere along the line happen where all the male lines died out.  This is why we can trace the red Y all the way back to this time but not anyone else’s.  And not any further back either.

This exact same thing happens with mtDNA except that moms pass it to all of their children.  All the women alive at the time of Mitochondrial Eve had their maternal lines die out with only Mitochondrial Eve’s remaining.

Now as I said, the identity of Y-Adam and Mitochondrial Eve are not set in stone. As we look at more and more people’s DNA, we may find Y chromosomes and mtDNA from branches we missed.  If new DNA from an unexplored branch and is added to the mix, then we might push things back farther as happened with that man from South Carolina.  Here is how that might look: 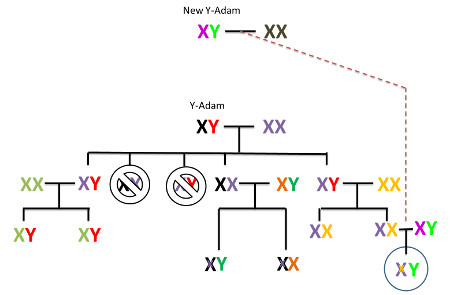 The circled man is someone whose DNA has never been seen before.  Now we need to go farther up the family tree to get to the next Y-Adam.

Bottom line is that when Y-Adam was running around, there were lots of other men there too.  Same thing with Mitochondrial Eve who had lots of women sharing the Earth with her.

If we went back to their time and traced maternal and paternal lines back, we’d reach a different Mitochondrial Eve and Y-Adam.  It’s all relative.