I recently did an ancestry test.  I came out as 0.5% African but my sister came out with no African.  Shouldn’t she be 0.5% too?

This is such a great question.  There is no reason to expect that the both of you should have 0.5% African DNA even though you came from the same parents.  Your result is a perfectly reasonable one.

This goes against the way most of us think of these things.  For example, in my family, we are always quoting what percentage Native American we are.

We had a distant relative who was from the Cherokee tribe.  Because of that, we say that my dad is 1/8th Native American and I am 1/16th.  While this is true from a genealogical standpoint, it may not be true from a DNA one.

Because of how DNA is passed on, I may have no Cherokee DNA left in my DNA.  This is even though my relative really was Cherokee.  And even though we really do get half our DNA from our moms and half from our dads.

What we need to know to understand results like yours is that the half the DNA we get from each parent is chosen at random.  So, for example, it may be that my grandpa just happened to pass no Cherokee DNA to my dad.  A DNA test would say he had no Native American in his heritage even though our family tree clearly does.

This sort of thing becomes more and more likely as the amount of DNA gets smaller and smaller.  Once we are dealing with 0.5% of something, we are really talking about one or maybe two tiny bits of DNA.  In fact, it is so small each child might have just a 50% chance of inheriting any of it from their parent(s).  And if a child happened to get half or even less of that 0.5%, the test might not even see the DNA any more.

So your result is perfectly reasonable.  You happened to get a bit of African DNA from one or both of your parents and your sister didn’t.

What I’ll do for the rest of the answer is use a few diagrams to try to make it a bit clearer how you and your sister could end up with such different amounts of African DNA.  I’ll use my DNA results as an example.

A Touch of African

Our DNA is stored in chromosomes.  Most people have 23 pairs of chromosomes for a total of 46.

Here is what my chromosomes look like from an ancestry point of view: 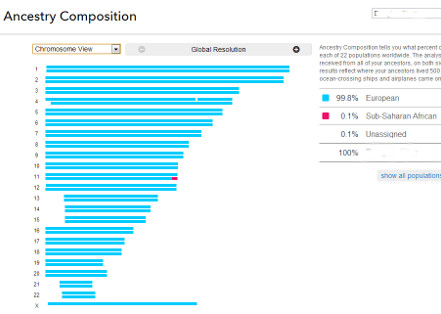 As you can see I have 22 pairs of chromosomes labeled 1-22 and then a lone X chromosome.  In reality, I have a Y to go with my X but this isn’t shown in this ancestry test.  If I were female, I’d have two X’s.

Looking at me you’d never guess there was an African American in my family tree.  But that is what that red at the tip of one of my chromosome 11’s suggests.  Somewhere on my mom’s or dad’s side of the family, there may have been an African ancestor.  (Probably dad for family history reasons).

This would be enough to explain your situation.  One of your parents had one chromosome in a pair that had some African DNA.  You happened to get this chromosome and your sister got the other one.  Simple.

Except of course, as any reader of our answers knows, nothing in biology is ever that simple!  To get at what actually happens, we need to go a little deeper into how a parent’s DNA is distributed into sperm and eggs.

This explanation won’t change the basics of what we’ve already talked about.  But it can show how other results are possible.  Like how you and your sister might have each ended up with 0.25% African DNA.

When we pass our DNA down, we don’t actually pass down one of our two chromosomes in each pair.  Instead we pass down a chromosome that is a mix of the two in the pair.  The DNA in each pair is swapped in a process called recombination.

Let’s focus on my pair of chromosome 11’s.  Here is one way the DNA might have swapped: 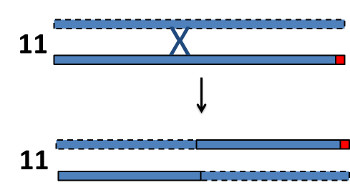 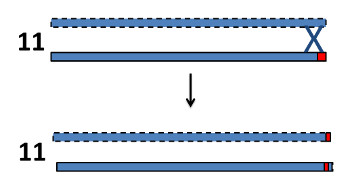 Now each child will get a bit of African DNA.  They will be down to 0.05% but it will be there (although it might be a small enough bit that the test can’t see it).

A recombination that happens right there, right in the middle of my African DNA would not happen very often.  Where DNA gets swapped is pretty random too.

So the most likely outcome for my kids at this point is an all or none one.  They will each have a 50% chance for getting my 0.1% African or a 50% chance of getting none.

Occasionally, if the DNA happens to get swapped in the exact right place, a child has a 100% chance of getting a bit of African DNA.  But given how little African DNA I have, the odds are very low for this outcome.  Still it could happen.

This sort of scenario probably describes your situation as well.  You happened to get a chromosome with a bit of African on it and your sister got a chromosome without it.  But another of your siblings might end up with 0.25% African.