I took the 23andMe test and found a relative that shares 22.2% DNA with me, over 33 segments. I am 31, and he is 27, from the same country.  We figured that we cannot be grandmother and grandson, since we are too close in age. Does this mean we are half brother and sister? Is there any other possibility?

-A curious adult from Israel

The most likely relationships at the 25% level are:

Note in that last paragraph the phrase “on average.”  These 25% numbers are theoretical…reality is never so clean.  In fact, you can already kind of see this effect in your results because your number is 22.2% instead of 25% (although some of that might be 23andMe related).

We do indeed get half our DNA from mom and half from our dad but that is the only time the numbers are so precise.  As we have discussed before, siblings usually share around 50% of their DNA but it isn’t ever exact.  Sometimes you can share more, sometimes less.  And the ranges can grow even larger the further we go out on our family trees.

What this means for you is that the two of you probably aren’t brother and sister.  While it is theoretically possible for siblings to share only 25% of their DNA, it isn’t that likely.  Most of the time they do share right around half of their DNA.

But what it might mean is that the two of you aren’t related in any of the ways I listed before.  For example, you two could be first cousins who happen to share some extra DNA.  Again I don’t have the data to know how often this happens (I bet 23andMe does) but it is certainly a possibility even if it is rare.

What I thought I’d do for the rest of the answer is show why certain relatives are predicted to share 25% of their DNA.  And then I’ll talk a bit about why these are only averages.  In the end you’ll see that 22.2% related can mean more possibilities than you might think.

Before we can show how the two of you might be related, we need to take a step back and understand how DNA is passed from parent to child in the first place.  Then we’ll be able to see who should be 25% related to each other.

First off, our DNA is packaged in 23 pairs of chromosomes.  We get one of each pair from mom and one from dad.  This is how most of us end up with the typical 46 chromosomes.

In this picture, each person here has 23 pairs of chromosomes.  Mom’s chromosomes are red and dad’s are orange.

As you can see, mom passes one of each pair of her red chromosomes to her child and dad does the same thing with his orange ones.  The end result is a child that has half red and half orange chromosomes.

For reasons that will become clear in a minute, this is really the only relationship that is this precise.  For all other relationships, including brothers and sisters, there is a range of how related you can be.

Let’s look at a bit more of an extended family to see why this matters.  I have included grandparents in this one: 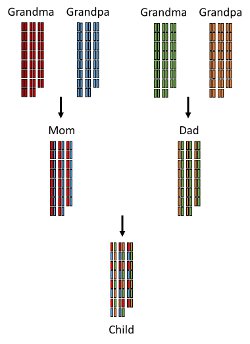 First off you can see that the mom and dad now each have two different colored chromosomes.  One set came from their moms and the other from their dads.  With a bit of sleuthing you can tell that the child at the end is still 50% related to mom and 50% to dad.

What this new color coding does is allow us to trace the child’s four different colored chromosomes back to the grandparents.  This is the most equal the distribution can be and still the child isn’t 25% related to each grandparent.

Remember, it is completely random which chromosome in each pair gets passed down.  What this means is that you might get the following outcome instead: 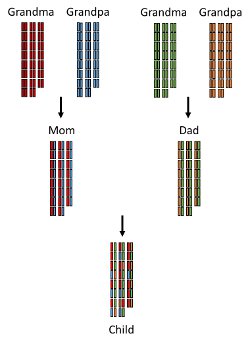 This is a little hard to see so what I’ve done is to enlarge the two children from the previous images and put them side by side: 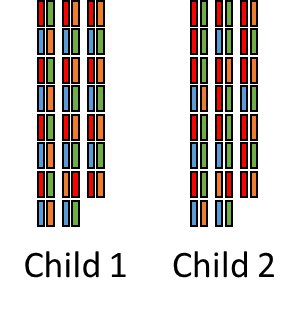 As you can see, Child 2 got more red and green chromosomes (and fewer blue and orange ones) than did Child 1.  This was pure chance, nothing else.  Like flipping a coin 23 times and getting 16 heads and 10 tails instead of 12 heads and 11 tails.  The second child just happened to get more green and red.

It is important at this point to say that I have simplified things hugely…too much really.  First off, each chromosome isn’t the same size, some are much larger than others.  This means that just counting chromosomes won’t give you a percent related number at the DNA level.  For that we need to include sizes too.

Even with that, if this is all there was to passing our DNA down, we’d be much more likely to have wider ranges of being related.  We would stray more often from the theoretical percentages because there are, in essence, so few coin flips.

In reality, we tend to stay closer to the expected numbers than we would if what I’ve talked about so far is all there was to inheriting DNA.  A big reason for this is something called recombination.

Up until now we have treated chromosomes as big packages that get passed unchanged from parent to child.  This is not the case.

As you can see, each of the child’s chromosomes is a mix of the two in each parents’ pairs.  So instead of just a red chromosome from mom, the child actually gets a mix of red and blue on the same chromosome.  This is true for all of the chromosomes the child got from both parents. (Actually, one exception is dad’s 23rd pair—the X and the Y chromosomes.  Turns out these pass down pretty much as is.)

This combination is also just one of a nearly infinite variety of possibilities.  We are each truly unique.

Besides making us each unique, recombination also makes it so that people tend to share an amount of DNA closer to the predicted amount than they otherwise might.  Instead of 23 decisions about which piece of DNA gets passed down, we have 60 or 100 (or even more) decisions.  The more of these decisions you have, the closer you tend to get to an average.

Again this is very similar to flipping a coin.  The more coin flips you have, the more often you’ll get close to 50% heads and 50% tails (try it out here if you don’t believe me).  So the more chances you have to inherit one or the other piece of DNA, the higher the chance it’ll all even out in the end.

So the bottom line is that the two of you are most likely double first cousins, aunt/uncle and niece/nephew or half-brother and half-sister.  But because of how DNA is actually passed down, there are other possibilities too.  This is why a family tree is such a powerful addition to DNA results.