My father is colorblind and my mom isn’t.  Why are all my sisters but none of my brothers colorblind?

-An undergraduate from Syria

This does seem like a weird outcome.  After all, everyone knows boys are way more likely to end up colorblind as compared to girls.

But this is only true when you look at big populations.  There are a couple of situations where boys and girls have an equal chance of being colorblind.

One is when both parents are colorblind.  In this case, every child will most likely be colorblind too.

Since your mom isn’t colorblind and neither are you or your brothers, this situation doesn’t really apply to you though.  Most likely your case is explained with a combination of your mom being a carrier and a bit of chance.

So while this explains why your sisters are colorblind, it doesn’t really explain why your brothers aren’t.  For that we need to introduce the element of blind luck.

For the rest of the answer I thought I’d go into more detail about how colorblindness is passed on.  As you’ll see, boys are more likely to end up colorblind most of the time.  But occasionally, as in your family, boys and girls can sometimes have the same chance.

A big part of these instructions come in the form of genes.  Each gene has the instructions for one small part of you.  And there are thousands of them.

But before doing that, we need one more bit of information.  Our DNA is stored in long pieces called chromosomes.  Humans like us generally have 23 pairs of these really long pieces of DNA.  We get one chromosome in each pair from our moms and one from our dads.

The pair we need to focus on is the one that determines whether you are a boy or a girl.  Girls usually have a pair of X chromosomes while boys have an X and a Y.

The X chromosome is also where the gene with the instructions for the red-green receptor is located.  This means that girls have two copies of this gene and boys have just one.  And this is why more boys are colorblind than girls.

As I said earlier, a gene is the instructions for one small part of you.  Sometimes people inherit a gene that has a glitch in its instructions.  This different version of the gene, called an allele, often makes something that no longer works correctly.  This is what happens in colorblindness.

Colorblind people only have alleles of the red-green receptor gene that have the instructions for making a broken receptor.  This is why they can’t tell red from green—they do not make any working receptors.

But one copy of a working gene makes enough receptor for a person to tell red from green.  So people who have a working version and a broken one aren’t colorblind.  Almost always these carriers are girls.

But if mom is a carrier and dad is colorblind, then daughters can be colorblind if they get a colorblind X from both mom and dad.  This is probably what happened to your sisters.

Now we are ready to tackle your situation.  If mom is a carrier, she has one X that can lead to colorblindness and one that doesn’t.

To make things easier to follow, we will call a “normal” X, X, and a colorblind X, Xc.  So mom is X Xc—she has one of each type of X.

Notice mom has two X's and dad has an X and a Y.  Also, mom is a carrier, she has one "normal" X and one colorblind X, and that dad is colorblind because he only has a colorblind X.

This means there are four different possible combinations and that the chance for any of them is the same.  In other words, there is a 25% chance for each of the possible outcomes.  Here they are: 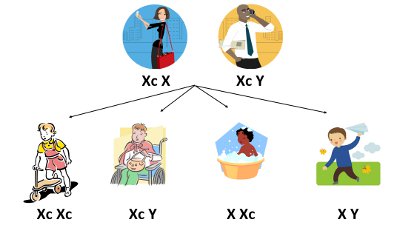 For the first child, mom passed an Xc and so did dad.  Since she has only Xc’s, she is colorblind.  This is probably what happened to each of your sisters.

The second child got an Xc from mom and a Y from dad.  He has only Xc’s and so is colorblind.  None of your parents’ children ended up with this combination.

The third child got an X from mom and an Xc from dad.  She has an X with a working red-green receptor gene so she is not colorblind.  None of your parents’ children hit on this combination either.

The final child got an X from mom and a Y from dad.  He has an X with a working red-green receptor gene and so isn’t colorblind.  This is you and your brothers.

Blind luck probably determined that your sisters would be colorblind and your brothers wouldn’t.  Blind luck and a copy bum copies of a red-green receptor gene.