Why would an uncle and nephew share large identical segments on the X chromosome?  Could this mean parents/grandparents were related in some kind of way?

-A curious adult from Louisiana

Maternal uncles and nephews would be expected to share segments on their X chromosomes whether their parents were related or not. On the other hand, if we are talking about a paternal uncle’s X chromosome, then sharing big chunks of the X chromosome could mean that the parents may have been at least distantly related.  As you’ll see below, the main reason for this comes from the fact that a guy always gets his X chromosome from his mom.

People usually have 23 pairs of chromosomes that together (with the mitochondria) contribute to their entire genetic makeup. We get one of each pair from each parent.

Most chromosomes were numbered by scientists based on size with the largest being number 1 and the smallest being number 22. (Scientists got this wrong as chromosome 21 is actually a bit smaller than 22.) The exception to this is the X and Y pair which determine whether you are a boy or a girl. They are known as sex chromosomes.

A male has one of each chromosome (XY) and females have a pair of X’s and no Y. Getting a Y chromosome and the SRY gene region that comes with it tells the embryo to begin making a man as opposed to a woman.

This means that it is the dad that determines whether a baby will be a boy or a girl.  If he gives a Y, he will have a son.  An X means a daughter.

This also means that guys always get their X from their mom.  If they got an X from dad, they’d be female.

Let’s examine the case where the uncle is on the mother’s side. Here is what this family tree might look like: 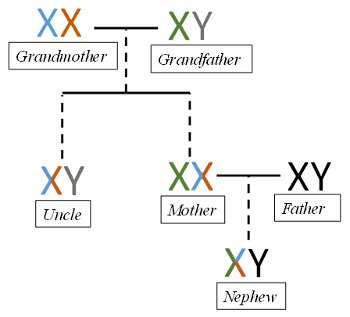 We are just going to focus on the sex chromosomes.  Notice that grandma and mom have two X chromosomes and that all the males have an X and a Y.

I have also color coded the chromosomes so we can follow who got what from which relative.  So grandma has a blue X and an orange X, grandpa has a green X and a gray Y and so on.

The uncle’s X chromosome comes from his mother (the grandmother in this image). That is because the Y had to have come from the father.

One thing you undoubtedly noticed right off the bat was that the uncle got an X from his mom that was a mix of her two X’s.  This is because of something called recombination that happens in each generation.

Because of recombination, the uncle has an X chromosome that is half blue and half orange.  It has a bit of both on his mom’s X chromosomes.

Now it does not have to be such an even swap.  The X he got might have more of one than the other as recombination can happen in many places.  I have chosen 50% to make the story simpler.

We can follow the nephew’s X’s in a similar way.  His mom also got an X chromosome that was half blue and half orange.  She also got a green X from her dad.

The nephew then got an X from his mom that was a mix of her two X’s.  As you can see, there is some green, some blue and some orange.

To make things easier to see, I have circled the part of the X that the uncle and nephew share: 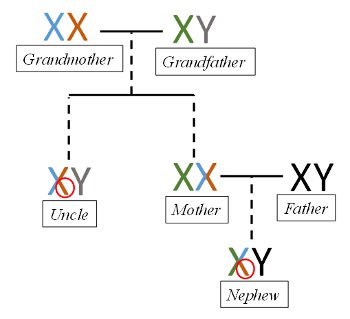 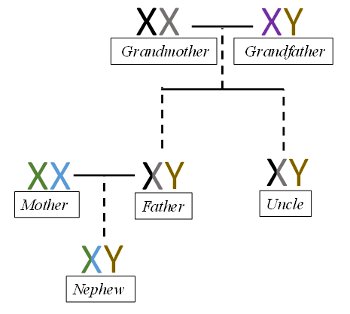 Here we have the same sort of layout.  Again each male gets their X from their mom and their Y from their dad.

As you can see, the nephew has a blue and green X from his mom and the uncle has a black and gray one from his mom.  There is no overlap between the two…they share no X DNA.

The situation might be different if the grandparents were related.  Here is one way this might look: 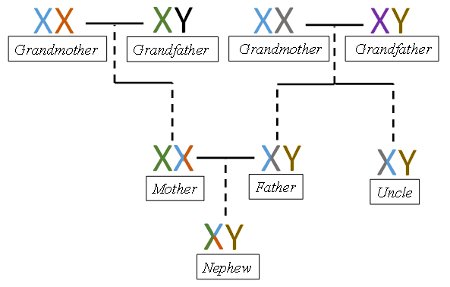 OK so that explains how an uncle and a nephew might share some of their X chromosome.  But a valid question may be how likely it is that any given maternal uncle and nephew will share large segments of the X chromosome.

Remember that recombination is the reason that a maternal nephew and uncle are likely to share some of their X chromosome.  In humans, there seem to be between 20-40 recombination events every generation, with 26 being published recently as the average (ref 1,2,3).

Some recent scientific literature suggests that the X chromosome undergoes between 1 and 2 recombination events per generation (ref 2,4). This means that a maternal uncle and nephew are likely to share one or two segments of their X chromosomes.

The X chromosome is on the longish side, having more than 153 million DNA base pairs or letters. Imagine having two recombination events that break it evenly like this:

You would still have at least 50+ million consecutive DNA base pairs that are identical to the previous X!  That is a huge shared segment.

Because chromosomes are very long, and there are few recombination events per chromosome, any two unrelated people will likely have some short DNA stretch that came from a common ancestor who lived a long time ago. It is like when you see two unrelated people with blue eyes; you might assume they share at least that small bit of DNA that gives rise to their eye color.

Recombination rate also means that not only do you share less of your DNA with more distant relatives, but the DNA you do share is likely to be in much shorter chunks than the DNA you share with your mother, for example. This is because the X chromosome (or any other chromosome) from your common ancestor has probably been chopped and swapped along the jumps from one generation to the next.

Depending on how the recombination events fall, you can have relatives that are as distant as second or third cousins and still have long stretches of DNA that are identical. This is especially true since recombination events do not occur randomly along a chromosome. Recombination tends to happen in what are called “hot spots” or regions that seem more susceptible to breaking and swapping DNA (ref 5).

So if grandparents were second or even third cousins, then it is easy to imagine how a paternal uncle and nephew could share a larger segment or two on their X chromosome.  They could even be more distantly related if things fell together just right.

And it is also possible that a maternal uncle and nephew might not share any DNA on their X chromosome.  Sometimes there is no recombination between a woman’s two X’s (or any of our chromosome pairs).  This might look like this: 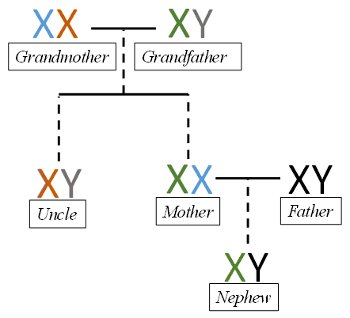 Here the uncle got the orange and his sister got the blue X.  By chance, they share no DNA.  Which also means the uncle and the nephew share no DNA! This scenario would happen about half the time under no recombination.

We know already that due to recombination the uncle is likely to get a mix of both of the grandmother’s X chromosomes. Likewise, so is the mother. The nephew will probably get a mix of his maternal grandmother and grandfather’s X chromosomes. So a reasonable guess is that the nephew shares one quarter of his DNA with the maternal uncle. The DNA they do share will probably be large identical segments since they are so closely related.

If you are interested in questions like these and how your DNA relates to your relatives and where your ancestors came from, there are now genetic testing services available that will give you that information from a little spit.