Suppose we have a geneticist who knows everything about genetics (how she got that knowledge isn't important to this question). She doesn’t just know everything we know now but everything we could possibly know.  How much genetic engineering would she be able to do with our current level of technology?

- A graduate student from California

First off, she will know every letter in your DNA.  Not just all the letters and what order they’re in, but also what all the genes do, and when they’re on or off.

She would know your genome in incredible detail.  But there is surprisingly little she could do with that information right now.

She could also look at a fertilized egg and have a good idea about what it would look like as a person. Additionally, she could see how everyone is related to everyone else, and fill in the world’s family tree.

For you, her options would be much more limited. Chances are, you would have to live with whatever your genes contain, be it a heightened chance for heart disease or Alzheimer’s. She would be all knowing, but almost powerless.

Genetic engineering is when you change an organism’s genome by taking out or changing the genes they were born with. It can also mean putting in new genes.

Until recently, we didn’t have a lot of ways to do this. This has changed in the last few years.

The most extreme examples of using today’s technology to modify genomes come from the field of synthetic biology. Synthetic biologists aim to create new types of life in the lab.

For example, in 2010, scientists took the genome out of a bacteria and replaced it with a genome that they made. This year, another group created a whole new chromosome in yeast. This opens the door to reprogramming life to do what we want.

Another example from the cutting-edge of today’s genetic technology is called “CRISPR-Cas9.” This system allows scientists to change DNA sequences very precisely. It is faster and easier to use than previous technologies.

This all sounds great, but it isn’t yet as powerful as it seems.  There are technical limits to what we can do today.

First of all, we don’t know how to add or delete genes in every type of organism. This makes it tough, for example, to coax algae into making fuels for us.

And as exciting as CRISPR is, it also still has major limitations. We can’t currently use it to edit the DNA in all of your cells at once, so it would be hard to fix diseases in adults. It is also inefficient in fertilized eggs, and no one has yet used it to add (rather than delete) a gene to a person (although they have added genes to flies).

Our current technology couldn’t do much with Gill’s vast knowledge.  But that wouldn’t be the case forever.  In fact, Gill’s knowledge would almost certainly spur new technologies.

Suppose all of the possible knowledge about genetics fit in a box. Let’s say that it is this big:

Now let’s look at the box holding all the current knowledge about genetics:

It’s much smaller. We’ll need a bigger box for all the knowledge we will gain in the future!

This is often how things work in science. Our new tools are new technologies, like faster ways to read genomes or more precise ways to change a gene.

For example, the CRISPR technology that I mentioned earlier came from learning new things.  It was inspired by how immune systems work in bacteria. Now we can use this technology to answer questions that we couldn’t answer before.

Gill’s case is different. She suddenly knows more than our current technology could tell her! Now, her new knowledge can push the limits of technology by leaps and bounds.

This could happen when you get your knowledge from somewhere else, like a different field of science, or in Gill’s case, mysterious magic. But it throws off all our predictions about what Gill would be able to do.

Nobel Prize winning physicist Richard Feynman said, “What I cannot create, I do not understand.” Gill could find herself dealing with the inverse of this: what I understand, I can create!

Up until now we have dealt with how technology could get in Gill’s way.  But there are also other things that could limit Gill.

One area that could give Gill problems is money. Many of her goals may be technically possible, but just too expensive.

For example, the synthetic bacterial genome I mentioned earlier cost about $40 million to make! Most labs don’t have pockets quite so deep.

She would also have to consider ethics. Just because something is possible, doesn’t mean it should be done.

For example, scientists can help certain infertile women have babies, but sometimes these babies would end up with DNA from three parents. This practice has been banned in the U.S. because of the ethical concerns about children with three parents. (Click here to learn more about the controversy; click here to meet a girl who was conceived this way.)

Finally, Gill will have to know more than just genetics to fully understand what she’s doing. Genetics is like a blueprint for a house. But there’s a lot that needs to happen between having a blueprint for a house and actually living in it. You can know everything there is to know about the blueprint, but you still need to build the house. 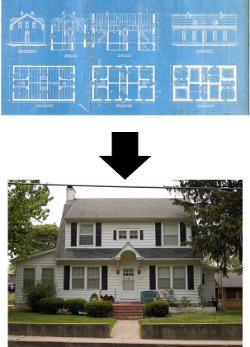 Assembly required. Some steps not shown.

To actually build the house, you need to know about carpentry, electrical engineering, plumbing, and more. Just like in biology, to really use “everything there is to know about genetics,” we need to know a lot about what happens between the genes (“blueprint”) and the living organism (“house”). That’s biochemistry, molecular and cellular biology, physiology, and more.

That’s the beauty of biology: it’s all inter-connected.