I learned in class that chromosomes get shorter every time a cell divides and that most cancers get around this with something called telomerase. How does telomerase work and how do cancers that don't use telomerase keep dividing?

As you can see here, chromosomes do get shorter every time a cell divides. This is why cells can only divide so many times. Too many and they lose key genes and die.

This shortening is a real problem once we get to sperm and egg cells. These cells need to have long telomeres so that the eventual baby can have telomeres of a usable length. Otherwise the human race would die out pretty quickly!

Our cells get around this problem with telomerase. Telomerase is a special enzyme that adds DNA back to the ends of chromosomes. Sperm, eggs, embryonic stem cells and a few others make telomerase while the rest of our cells do not.

But around 10-15% of cancer cells don’t. These cells have come up with a new way to keep their chromosomes intact. This process is called Alternative Lengthening of Telomeres (ALT).

Basically the cancer cell has mutated in such a way that a chromosome can now copy a long telomere from another chromosome and use it. Now there is no need for telomerase!

As you might guess, this is a messy process and one that normal cells would never do. No, that is why normally if a cell needs a longer telomere, it turns to the enzyme telomerase.

Telomerase Adds DNA to the Ends of Chromosomes

As I said earlier, chromosomes lose a bit at each end each time they are copied.   A cell prevents this slow decay of its DNA ends with telomerase.

Telomerase is an enzyme that adds short DNA sequences to the end of DNA. Unlike most enzymes, telomerase is more than just protein. It also has a bit of RNA too.

Telomerase uses this RNA molecule as a guide or template to add the right DNA to the ends of the chromosomes. In humans, it always adds the repeat sequence “TTAGGG.” It keeps doing this over and over and over.

In humans, there can be as many as 8000 copies of the repeat on the end of each chromosome! Together, these telomerase repeats make up a telomere. 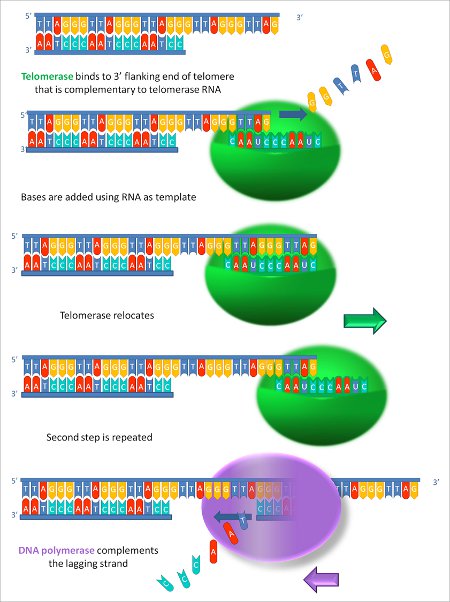 Each time a cell divides, its chromosomes lose a few of those repeats that telomerase added to their ends. Since in a healthy person only certain kinds of cells have telomerase turned on, this means that as people get older and their cells have divided many times, their telomeres get shorter and shorter. Eventually they lose too many repeats and their cells die.

At first it might seem weird that all our cells don’t keep making telomerase to keep their chromosomes from getting short when they divide. If telomerase were always active, a cell could keep dividing forever! Why wouldn’t we want that? Well, it turns out that having telomerase on all the time can sometimes have a nasty side effect: cancer.

Many kinds of cancers have mutations that turn on telomerase all the time. Unlike in a normal cell, once cancer cells get telomerase on, they never turn it off. Instead the enzyme just keeps adding more and more repeats to the telomeres.

Now the cancer cell can keep dividing without losing DNA and genes at the ends of the chromosomes. Turning on telomerase is critical for keeping these cells going. Good for the cell, bad for the patient.

Telomerase activity has been found in almost all types of human cancer, although not all. Most cancers that do not have active telomerase have found other ways to maintain the length of their telomeres.

About 10-15% of cancer cells use Alternative Lengthening of Telomeres (ALT), including some types of breast and bone cancers. But exactly how ALT works is not well understood.

We know they are able to keep the repeats at the chromosome ends, and we know that they do not have active telomerase. But how they pull it off seems to be pretty complicated. And it’s probably not the same in every different kind of cancer.

In cancer cells that use ALT (and most other cancers too), genes affect DNA repair end up mutated so they don’t do their job any more. Now these cells can’t fix their DNA, which means they build up mutations faster and faster. 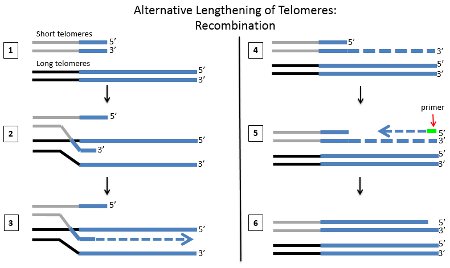 Homologous recombination only happens between two DNA pieces that have some of the same sequence. Since the telomeres all have the same repeats, the ends of any two chromosomes have a lot of identical sequences.

During recombination, the ends of two different chromosomes pair up (step 1). Then one strand of the shorter telomere “invades” the longer telomere (step 2). Again telomeres are able to do this because they all have lots of copies of the same repeat sequence. These repeat sequences on the different chromosomes can then base pair and stick together.

Next, a DNA polymerase adds bases to the end of the short telomere, using the long telomere as a template (step 3). After the long telomere has been copied, the different chromosomes separate (step 4). Now that half of the original DNA piece has been extended, the strand with the newly copied telomere can be used as a template to fill in the other half (step 5). At the end of this, the telomere is much longer than it used to be.

By using homologous recombination, cancer cells are able to keep their telomeres long without needing telomerase at all!

A detailed look at why chromosomes get shorter each time they are replicated and how telomerase fixes the problem.