I am an identical twin. What percentage of genes do my children share with my twin sister's children?

-A curious adult from Ireland

Because you and your sister are identical twins, you pretty much have the same DNA. Not exactly but pretty darned close.

This is because you both started from the same fertilized egg. Which is why identical twins are also called monozygotic.

Since you both have the same DNA, this is almost like the two sets of children have the same moms but different dads. In fact, this is why at the DNA level they are really more like half siblings instead of first cousins. They share 25% of their DNA (and genes) instead of the usual 12.5%.

Legally your kids and your sister’s kids are first cousins but at the DNA level they are half siblings. They share twice as much DNA as run of the mill first cousins!

What I thought I’d do for the rest of the answer is go into a bit more detail about why you and your sister’s kids share 25% of their DNA. As you’ll see, it has to do with how DNA is passed on.

We get half our DNA, or genetic information, from our mom and half from our dad. This DNA comes in packages called chromosomes.

Most people have 46 chromosomes arranged in 23 pairs. When we get our DNA from our parents, we inherit one chromosome from each of their pairs.  This is what it may look like for any given pair: 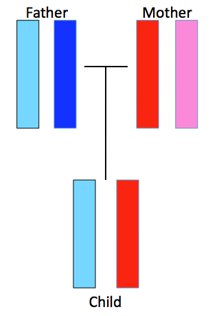 If only it was that simple! Chromosomes are almost never passed down whole. Instead, parent chromosomes in each pair swap DNA with each other while forming sperm and egg cells. This process is called recombination.

Here is something closer to reality: 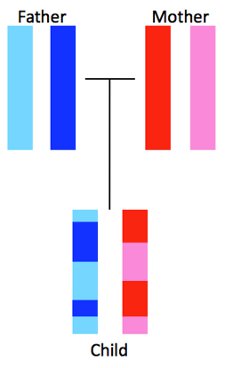 Instead of getting an all dark blue or light blue chromosome from dad, the child got a mix of the two. Same thing with mom.

This is actually just one of the many possible combinations.  Recombination can happen at any place along a chromosome leading to infinite color combinations! 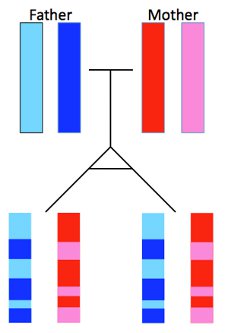 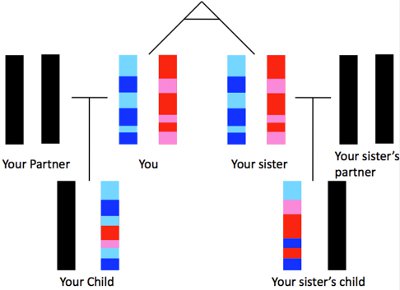 I’ve put your partners’ chromosomes in black.  Since your partners aren’t related, we don’t need to consider their contribution since we’re focusing on you and your sisters’ DNA to determine how your kids are related.

You probably noticed the regions where the two chromosomes line up. For example, each chromosome has a light blue top. Here are all the matches: 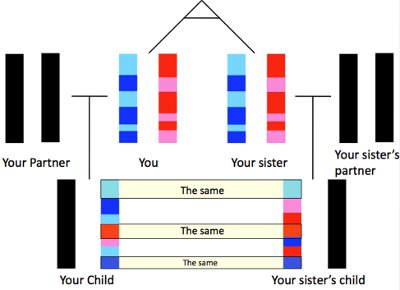 As you can tell, they share about half their DNA on each chromosome. On average this will be true of each chromosome they got from you and your sister.

The 25% number comes from the fact that the chromosomes the children get from their dads won’t line up this way because the dads aren’t related. Half of one chromosome plus none of the other gets us to 25% related.

First Cousins vs. Half Siblings

Now let’s see what happens if you and your sister were not identical twins.  In that case you would share only half your DNA instead of all of it.  The DNA for each of you from one chromosome pair might look like this: 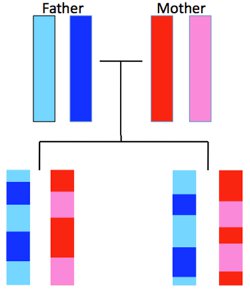 As you can see, the two of you no longer have matching chromosomes. Here is what happens when we add you and your sister’s partner: 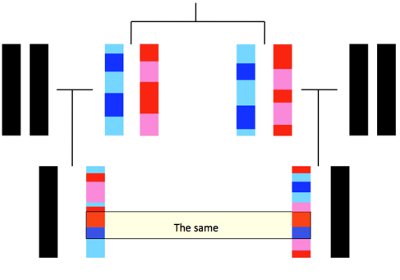 As you can see, your kids would now share much less DNA than they do now. Instead of half of one chromosome from each pair, they would on average share around one quarter. This is why first cousins share around one eighth or 12.5% of their DNA.

So, as you can see, you and your sister’s children share around 25% of their DNA through their moms instead of the typical 12.5% for first cousins.  Pretty neat, right?  It’s almost like they’re genetically half brothers and sisters!

You may have noticed that I have said around and on average a lot. This is because two siblings don’t share exactly 50% of their DNA. Instead they share around 50% on average.

Technically it is possible for siblings to share no DNA or all of their DNA (even when they aren’t identical twins). This is true because the amount that two people are related genetically totally depends on recombination!

Like we talked about earlier, there are an infinite number of color combinations for the chromosomes we pass on.  Imagine this possibility: 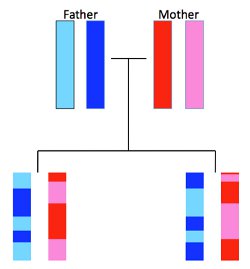 As you can see, by chance these two siblings share only the tiniest of slivers of red DNA in this chromosome pair. If this happened on the other 22 chromosomes as well, then the siblings would be less related than 5th cousins!

Of course this is pretty unlikely which is why most siblings do share pretty close to 50% of their DNA. But still it does happen. Maybe this is why some siblings look more alike than other siblings!