It seems like brothers and sisters should have the same ancestry background. After all, they both got half their DNA from mom and half from dad.

But because of how DNA is passed on, it is possible for two siblings to have some big differences in their ancestry at the DNA level. Culturally they may each say they are “1/8th Cherokee” but at the DNA level, one may have no Cherokee DNA at all.

So yes, it is definitely possible for two siblings to get pretty different ancestry results from a DNA test. Even when they share the same parents.

DNA isn’t passed down from generation to generation in a single block. Not every child gets the same 50% of mom’s DNA and 50% of dad’s DNA. (Unless of course they are identical twins).

One way to think about this is to imagine DNA as a bunch of colored beads. Since we are interested in ancestry here, we will say that different colors mean different ancestries.

Imagine that a man from Japan marries a woman from Europe. Her DNA happens to be 100% European and his 100% Asian.

Let’s say that the European beads are red and the Asian beads are blue. Here is what this might look like: 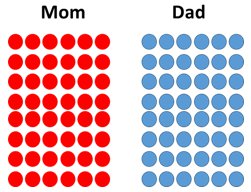 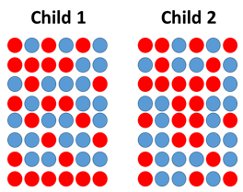 In this case you can see that each child actually shares the same ancestry even though they got some different DNA from each parent. They are each 50% European and 50% Asian.

Lots of Colors, Lots of Possibilities

Let’s now imagine a couple of more complex situations. First we will add in some green beads from sub-Saharan Africa. Imagine these parents: 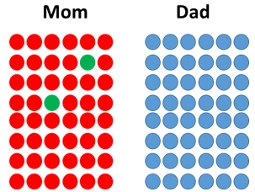 The difference here is that mom has a small bit of African ancestry in her family tree. This is actually pretty common in the U.S.

Otherwise everything else is the same. Red is European, blue is Asian.

Imagine this is their first child:

As you can see, by chance this child didn’t happen to get any green beads. A DNA test would say the child has 0% African DNA.

Now imagine a second child happens to get this arrangement: 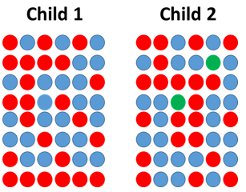 As you can see, by chance the second child inherited both green beads from mom. In an ancestry DNA test, child 1 would be 0% African while child 2 would be around 4%. Even though they have the same parents.

It all has to do with which DNA you happen to get from each parent. It might have ended up that each child got one green bead each but it doesn’t have to be that way.

Now imagine the newer tests that split European, Asian, Pacific Islander, African, Native American and so on into many subcategories. Now even the first mom’s all red becomes a variety of different colors. And these can get passed down differently leading to different percentages. 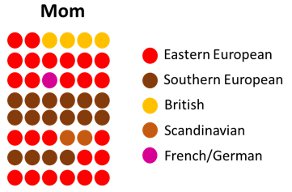 Now she has children with her Japanese husband. Here is what the children’s DNA might look like: 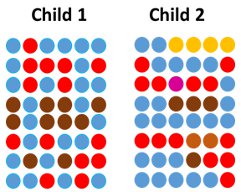 Now it is getting very confusing. By chance, child 1 has no British, French/German or Scandinavian DNA while child 2 does. Even with the same parents!

Now split the Southern and Eastern European DNA into subgroups and see what happens. Then start splitting dad’s DNA further to add more to the mix. Do all of this and you can see how siblings might wind up with very different ancestry results indeed.

Beads on a String

Of course, real DNA isn’t beads. But you can think of it as sort of like beads on a string. Each string of beads is a chromosome, a long stretch of connected DNA.

People typically have 23 pairs of chromosome. One from each pair comes from mom and one from dad.

Before mom passes down her chromosome to her child, her two chromosomes in a pair swap some DNA. Something like this: 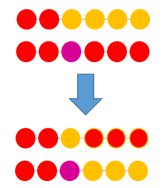 The top string of beads is one chromosome and the bottom is the second. Through recombination (the blue arrow), the three yellow beads at the end of the top chromosome swapped with the three red ones in the bottom chromosome. One of these new chromosomes is then passed on to the child.

This process happens with each pair of chromosomes. And happens in new combinations with each egg (or sperm for dad). Infinite combinations are possible! Which is why two siblings can end up with different ancestries with the same parent.

As a fun aside, here is what this might look like with real data. This shows ancestry data painted onto chromosome 11 from a brother and sister with a shared father:

The little green box in the image below shows the part of this chromosome that is actually shared:

A quick comparison with the ancestry results might suggest that these two don’t share this DNA. This is why it is important to really look at the DNA before jumping to any conclusions. Sometimes northern European is the same as French/German.

As we add chromosomes these differences can become less obvious. It may be that there is more common DNA on many of the other pairs of chromosomes making this difference less significant.

Even with this, there are real differences in terms of ancestry even with the same parent. DNA ancestry can be very different from cultural ancestry.

By Dr. Barry Starr, Stanford at The Tech