- A curious adult from Oklahoma

Believe it or not, a woman actually passes some of each of her X’s to her kids. And each child gets different parts of each X.

It is a different story for the DNA from dad. Dad has an X and a Y, and he passes one or the other to a child virtually unchanged. If he passes an X, he has a daughter, and if he passes a Y, he has a son.

For the rest of the answer, I’ll go over why X’s from mom are passed down differently than X’s from dad. As you’ll see, it has to do with something called recombination.

With a couple exceptions, we actually get half our DNA from mom and half from dad. That’s because DNA is organized in 23 pairs of long strands called chromosomes. Mom will give you one chromosome of each pair, while dad gives the other.

DNA is made up of units of information called genes. We have genes for hair color, eye color, and so on. If DNA is the recipe book for life, you can think of chromosomes as the pages, and genes as the individual instructions.

Although the two chromosomes in a pair both code for the same genes, they are also slightly different. After all, not everybody makes, say, brownies the same way – someone may use nuts, while another person might not.

Just like brownie recipes, genes are written out in “letters.” But the genetic alphabet is much simpler than most others—it has only 4 letters! So our DNA is arranged in a sequence of “A’s,” “T’s,” “G’s” and C’s,”

The end result is that mom and dad both contribute to every gene that makes us who we are, so nobody feels left out!

One chromosome pair is important for giving us features that make us a boy or a girl. While the other 22 pairs of chromosomes are a little different in DNA sequence, these sex chromosomes are so different that they come in two distinct flavors – X and Y. 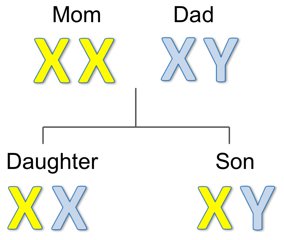 From this picture, you can’t tell which X the mom will give her daughter. But she’ll actually give a little bit of both! How is this possible?

As it turns out, one more thing has to happen before most DNA gets passed down. The mom’s two X chromosomes exchange parts, or recombine, like so: 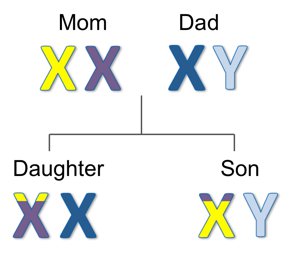 Here I’ve drawn the X chromosomes in different colors, purple and yellow for mom, and dark blue for dad. Not only will this make them easier to follow, but it will also more accurately show what happens in real life. Different chromosomes have slightly different sequences.

As you can see, mom’s X chromosomes have exchanged parts. Again, because mom’s two X’s are slightly different, this recombination gives new combinations of DNA, and each child gets a different combination. Her daughter got mostly purple with some yellow tips and her son got mostly yellow with purple tips.

Also, the daughter’s and son’s X’s don’t have to be mirror images of each other. I just drew them this way for simplicity. There are many different combinations of the mom’s X chromosomes they can receive!

That’s because there are almost an infinite number of ways that mom’s two X’s can swap DNA. And this is true for the other 22 chromosome pairs in both mom and dad.

This recombination evolved to make individuals in a species different from each other, so that if something were to happen, the species as a whole would survive. Someone somewhere will have the lucky combination that helps them survive!

You may have noticed that the dad’s X doesn’t recombine with the Y. This is because recombination requires that two chromosomes share a lot of their DNA. The X and Y are just too different from one another.

Tracing DNA Back in Time 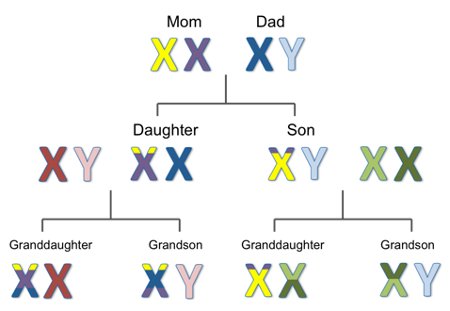 As you can see, both of the daughter’s children, regardless of sex, have pieces of X chromosome from their grandparents’ purple, yellow, and dark blue X’s. Because of recombination, your X is a happy mix of your maternal grandparents’ X’s!

Remember, he has 22 other pairs of chromosomes. One of each of those pairs has DNA from both the paternal grandma and paternal grandpa.