What we've learned from studying the Y chromosome

Did Thomas Jefferson father a child with one of his slaves, Sally Hemmings? When did the father of everyone alive today live? Is the Lemba tribe of southern Africa really related to the Jews? How many male descendants of Genghis Khan are alive today? What do all of these questions have in common? We have been able to come up with answers to all of them by studying the Y chromosome. There are two sex chromosomes in mammals, the X and the Y. Females have two X chromosomes while males have an X and a Y. The Y chromosome has the genes for making a mammal a male (and little else). It is the smallest chromosome and has only around 75 genes. Why is the Y chromosome so useful for these studies? The main reason is that the Y chromosome is the only chromosome without a partner. As you know, there are two copies of each of the other chromosomes -- one from mom and one from dad. The other chromosomes, including the X in women, exchange DNA with their partner before entering the sperm or egg. This process is called recombination. Recombination is an important part of making each generation different from the last but it really gets in the way of any sort of historical analysis. Because the Y chromosome is all alone, it only recombines with itself. (This isn't strictly true as the ends of the Y chromosome have a lot in common with the X chromosome so there is some recombining that goes on there.) This means that most of the Y chromosome passes almost unchanged from generation to generation. Researchers showed that Thomas Jefferson's male heir and Sally Hemmings' male heir shared a Y chromosome. Researchers also showed that the Lemba tribe shared its Y chromosome with both Jews and Arabs. Below are two articles that deal with finding out about history from the Y chromosome. The first article below provides evidence that Genghis Khan may be related to 1 out of every 200 males in the world! The second article presents evidence that may call into question some of the assumptions used to date events like when humans first left Africa or when the father of everyone alive today lived.
Genghis Khan, the ultimate alpha male
Are you distantly related to Genghis Khan? If you have Asian and/or European ancestors, you just might be. A recent study was done to look at the Y chromosomes of 2,123 men across Asia. An astonishing 1 in 12 men shared the same Y chromosome. If this ratio holds up, that would mean 16 million males or 1 out of every 200 living males share this Y chromosome. Early results indicate that the distant "father" of all these men was from the Mongolia area around 800-1200 years ago. Who could have fathered all of these males? The most obvious candidate is Genghis Khan. Genghis Khan lived from 1162-1227 and raped and pillaged from Mongolia to the gates of Vienna. Once he captured a village or town, he would essentially kill all the men and rape the women. While deplorable from a social point of view, it seems to have been wildly successful from a biological point of view. As I said above, 1 in 200 males today may trace their lineage to Genghis and his sons. Of course, this is a guess because we don't have Genghis Khan's DNA. His tomb remains hidden although the search is on to find it. Once we have his DNA, then we can determine if he really was as prolific as this data suggests.

Genes of the greatest lover in history found?
Genetic Legacy of Mongols 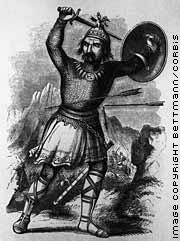 How do they know that
How did people figure out that the distant "father" of 1 in 200 males alive today lived 800-1200 years ago? Or that the father of all humans ("Adam") was alive 40-50,000 years ago? These estimates come from looking at differences in the Y chromosome over time. But wait a minute you might be saying. You just said that we can use the Y chromosome for historical studies because it can't recombine and so stays constant. Notice I said earlier that the Y chromosome passes from generation to generation virtually unchanged. It does change a little over time because of random mutations (nothing is perfect including copying DNA). It is these rare mutations that let scientists date when things have happened in the past. Scientists use DNA to estimate when things have happened in the past by assuming a certain rate of mutations over time. Let's say that the Y chromosome gets 1 new mutation/generation (much higher than the actual rate). If this is the case, then if two people have 10 differences between them, then they are 10 generations apart. The mutation rate scientists have used in the past was based on circumstantial evidence because there was just too much DNA to sequence. Until now. For the first time, groups in Indiana and New Hampshire have figured out a mutation rate based on sequencing huge amounts of DNA from lots of the roundworm, C. elegans. How much DNA? An astonishing 4 million base pairs -- an impossible number just a few years ago. What the researchers found was that the mutation rate was 10 times higher than previously believed or around 2 mutations/generation for C. elegans. There are possible reasons that given the way the experiment was done, the mutation rate might have been artificially high. But, if the new number is true, it calls into question all sorts of things. For example, partly based on DNA evidence, scientists believed that chimps and humans separated about 5 million years ago. Was it actually 500,000 years ago? Humans began their migration out of Africa 100,000 years ago. Or was it 10,000? Did "Adam" live 50,000 or 5000 years ago? Some of these new numbers are obviously wrong. From archeological digs, we know there were people in Europe, Asia, and even the Americas more than 10,000 years ago. From fossil evidence we know that chimps and humans separated more than 500,000 years ago. Obviously, then, more work needs to be done to get at this critical number. And if the mutation rate isn't constant over time, we may never be able to get a good number. In the meantime, the work done here will need to be repeated lots more times before we begin rewriting history. With the advent of new sequencing technologies, we are now able to do experiments undreamed of just a few years ago.

Evolution, Mutation May Occur Faster than Thought
High mutation rate and predominance of insertions in the Caenorhabditis elegans nuclear genome