Nobel 2009: Why Some Cells Live Longer than Others

Award also Highlights Women in Science
October 25, 2009 When a scientist's research contributes to the fields of cancer, aging, and stem cells, other scientists notice. When it also solves a major biological mystery, the Nobel Prize committee notices. This year's Nobel Prize in Physiology or Medicine was awarded to Drs. Elizabeth H. Blackburn, Carol W. Greider, and Jack W. Szostak. Their research provided critical insight into why most cells age and why some cells, like cancer cells, do not. It is also the first time that more than one woman received a Nobel in the sciences, illustrating the growing role of women in science. DNA in cells is separated into chunks called chromosomes. One reason cells age is because every time they divide, they lose a little bit of DNA from the ends of their chromosomes. This eventually leads to a loss of important DNA, and they die. The solution to this problem is the telomere. Telomeres are extra DNA that act like caps at the ends of chromosomes. Instead of important DNA being lost during division, part of the telomere is lost instead. This was one of the key findings by Blackburn and Szostak that led to them getting a Nobel Prize. Telomeres led to another question -- how do cells put them back onto chromosomes? Some cells like stem cells that need to divide a lot need to be able to replace their telomeres. And cells like sperm and eggs need new telomeres so they can be used to start the whole process of cell division in a new life. Greider and Blackburn showed that telomerase, an enzyme, maintains telomeres. It does this by adding the extra DNA onto the ends of chromosomes. This last result provided clues about why some cancers are able to divide forever. In 80-90% of cancers, telomerase is overactive, allowing cancer cells to keep all of their important DNA. Scientists are now trying to target telomerase to treat cancer. The other notable accomplishment of this year's Nobel Prize is the growing prominence of women in science. More women were awarded the Nobel in 2009 than any other year. Five of the thirteen 2009 Nobel Laureates were women, and four of them were in the sciences. This year, Elinor Ostrom became the first woman to win the Nobel Prize in Economic Sciences. Young women should take note: science is not just for men.
Telomere Basics
As mentioned, DNA is separated into chunks called chromosomes. On each of these chromosomes are stretches of DNA called genes. These genes contain the instructions for making all the different pieces of a person. Losing some of the instructions can be disastrous, so they need to be protected. From what? From the process of being copied, from other chromosomes and from the cells themselves. When one cell divides into two, it has to copy all of its DNA, which means every chromosome has to be duplicated. However, this process of copying is not quite perfect. The very ends of each chromosome are lost. If this problem were not addressed, chromosomes would start to lose genes after a few cell divisions. (Watch the animation below to see why the ends of chromosomes are lost.) The solution is relatively simple: add some extra DNA that doesn't have any information to the ends of each chromosome. That's basically what telomeres are. They don't have important information in them like genes do, so they can be lost without the cells caring much. In other words, cells can divide and still keep their information. This isn't all that telomeres do. They also attract other proteins that help protect the ends of the chromosomes. This does two things. It prevents two chromosomes from fusing together and helps a cell recognize its own DNA. Cells don't like random DNA floating around because it may be from viruses or some other invader. So, there is machinery that is responsible for breaking it down and getting rid of it. One sign that a piece of DNA is not foreign is the presence of telomeres. In fact, this is one of the experiments that led to the discovery that telomeres protect chromosomes. Szostak noticed that when he put a piece of DNA into yeast, the yeast would get rid of it. Blackburn had observed that the ends of chromosomes of a different organism had an interesting DNA pattern. DNA is made up of four different molecules represented by the letters A, C, G, and T. The order of these letters is what makes each living thing unique. Blackburn noticed that the DNA at the end of a chromosome had a repeated sequence: CCCCAA CCCCAA CCCCAA. But she wasn't quite sure what it was doing. Szostak and Blackburn decided to add this repeated DNA to the DNA that Szostak was putting into yeast and see if it could now stick around. It did. The yeast did not get rid of it, showing that the telomeres could actually protect the DNA. The next step was figuring out how telomeres were added. While many cells don't divide enough to start losing important genes, some cells, like sperm, eggs cells, and stem cells, divide a lot. They need to maintain their telomeres. Greider, while working in Blackburn's lab, figured out how telomeres are added. They discovered an enzyme that adds telomeres after they've been whittled away. She named the enzyme telomerase because it was adding telomeres to the ends of chromosomes. Szostak, Blackburn, and Greider had figured out what shields chromosomes from degradation and how that shield is maintained. The following years of research exposed a role for telomerase and telomeres in cancer and disease.

More on Telomeres
What telomerase looks like
Medical Possibilities
Scientists refer to some cancer cell lines as immortal because they can basically live forever. And this is what makes many cancers dangerous"Šthey divide and divide until they cause a person to die. If cancer cells were normal, they would eventually stop dividing because their chromosomes would get too short. But cancer cells grow without knowing when to stop, and telomerase actually helps them to keep growing. As mentioned before, many cancer cells have higher telomerase activity than normal cells. This makes it an attractive target for cancer treatment. If telomerase activity can be shut down, cancer cells would no longer be able to divide forever. Since this is what makes a cell cancerous, this would cure the patient. There are a number of cancer treatments in clinical trials that target telomerase. And cancer is not the only disease where telomerase goes awry. Another disease is a type of aplastic anemia called Dyskeratos Congenita (DKC). It has been linked to problems with telomerase and proteins that interact with it. With DKC, a person's body does not make enough red blood cells. Bone marrow cells are the source of red blood cells throughout the life of a person. They divide a lot, which means that they need high levels of telomerase to survive many divisions. If telomerase is mutated in the bone marrow cells, they can't produce red blood cells for the lifetime of a person. The result is a low red blood cell count (anemia). Like most biological processes, telomerase needs to be active at the right level in the right cells. Finally, tying telomeres to cell aging seemed like a promising way to explain how people age. Maybe popping a pill of telomerase could prolong our lives? Unfortunately, the aging process is more complicated than simply shortening telomeres. There are many genes and environmental factors involved and scientists are still trying to figure it all out. Telomeres probably play a role, but they aren't the only players.

Women and the Nobel

As mentioned before, this year's Nobel Prize awards were notable in that women were prominent. The Nobel Prize was first awarded in 1901 and has been awarded to men and women for "achievements in physics, chemistry, physiology or medicine, literature and for peace," as the Nobel web site states. In the history of the Nobel Prize, 802 individuals have been recognized. Only 40 of them have been women. Of the women, only 16 were recognized for sciences (the others were recognized for Literature and Peace). Marie Curie is the only woman to receive the award twice. Interestingly, she and her daughter, Irene Joliot-Curie, were the only women recognized before World War II. Of course, women scientists were quite rare at that time. Fortunately, women are becoming more common in scientific fields. Since 1945, fourteen women have become Nobel Laureates in the sciences, and six of those within the last ten years. This trend illustrates that women are playing an increasingly important role in science. Within the sciences, ten women received the award for Physiology or Medicine, four for Chemistry, two for Physics, and one for Economic Sciences. This is the first time in 35 years that a woman has been recognized in Chemistry and the first time ever that a women received the prize for economics. In Physics, no woman has been recognized since 1963. On the other hand, women have been a relatively steady presence in the Medicine or Physiology category since the late 1970's. These facts demonstrate that while women are becoming more prominent in some fields like the life sciences, there is still much progress to be made in others. But now young women have a few more high profile role models science. Let's hope this year's Nobel Prizes are an indication of what's to come. 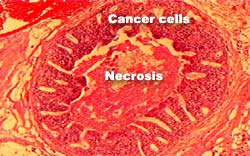 Shutting down telomerase can stop
cancers like these from growing.