While people are a little hesitant to muck with human DNA, it looks like anything goes in the pet world. Last year we had glowing fish, this year two cloned cats at a recent cat show and sometime in the near future, cats people won't be allergic to anymore. Wow, a brave new world. What's up with all of these changes? People come up with all sorts of ethical and economic reasons for not cloning people but they don't seem to apply to pets. For example, how many of the millions of dogs and cats destroyed each year could live for the cost of cloning a single cat? The glowing fish and the hypoallergenic cats both have good intentions behind them. The glowing fish were originally designed as a sensor for polluted water. If a certain chemical were in the water, the fish would glow -- sort of like a canary in a coalmine. The why of the hypoallergenic cats is pretty obvious -- they are being designed so the millions of people with cat allergies can own a cat. Seems reasonable although at $3500 a cat, it seems like they could just own a dog. As you can tell from just these few examples, science is moving incredibly fast in genetic engineering. In particular, the creation of hypoallergenic cats shows how basic research and public need can intersect to create a new product in years instead of decades.
But mommy, I really want a cat!
If your child is allergic to cats, you won't have to buy one of those hairless breeds anymore. Instead, you can turn to a California biotechnology company called Allerca. Allerca is using a technique called gene silencing to create cats that people won't be allergic to. Up to 10% of Americans are allergic to cats. Almost all of these 30 million or so people are allergic because of a reaction to a single protein called "Fel d 1." This cat allergen is made in the skin and salivary glands and is so small that it can stay in the air for months at a time. What scientists are doing is designing a cat that doesn't make this allergen. How are the folks at Allerca going to do this? To explain this, we need to review a couple of points from basic genetics. Remember, a gene is just a recipe for a protein. The DNA of the gene is copied into RNA, the cell reads the RNA, and a specific protein is made. For our cats, this means that a single gene is read into RNA and made into the cat allergen Fel d 1. The scientist's job is to shut off that gene so that Fel d 1 isn't made anymore. Voila, an allergen-free cat. To get rid of a protein, you can either destroy its gene, the RNA from its gene, or the protein itself. The scientists at Allerca decided to go after the RNA. What they are doing is turning the cat allergen RNA into something the cell will destroy. How are they doing this? By making the cat allergen RNA double stranded. Unlike DNA, RNA is usually made up of a single strand. While there are some acceptable forms of double stranded RNA (like tRNA, rRNA, etc.), some are intolerable to the cell and are eliminated. What the scientists at Allerca have done is to turn part of the cat allergen RNA double stranded using a recent technique called gene silencing. In gene silencing, scientists have the cell make lots of a very small RNA called siRNA that attaches itself to the RNA they want destroyed. The cell sees this double stranded RNA and chops it up. No RNA, no protein, no allergy. What is really astonishing about all of this is how quickly gene silencing (or RNA interference) has gone from the lab to these hypoallergenic cats. The technique got its start in the humble roundworm C. elegans in 1998. Within a few years, scientists found that it worked in mammalian cells too. This finding was huge and not only for making hypoallergenic cats. Knocking out a gene in mammals used to be a long, painful, laborious process. People did it anyway because it is one of the few ways to really confirm what a particular gene does. This is important to know for understanding biology and developing new medicines. Gene silencing promises to revolutionize biology by letting scientists quickly figure out what each gene does. If gene silencing holds its promise, we may be able to find good drug targets faster, greatly accelerating the discovery of new medicines. And all because of a little nematode living in the dirt...

A CNN article about hypoallergenic cats
More about gene silencing 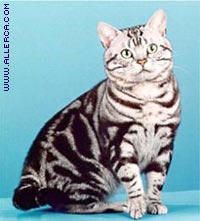 Cool fish! Cool rabbit! Cool...
The technology behind the glowing fish is much simpler and much older than the technology behind the allergy-free cats. In fact, the technology is so simple that we have visitors make glowing bacteria here at The Tech! Since their discovery, people have been putting the genes for fluorescent proteins into plants, animals, bacteria, and anything else they can think of. These glowing proteins are a useful way to study biology in a living animal and they look pretty cool too. So how did glowing animals come about? After years of work, scientists identified the gene that made the jellyfish, Aequoria victoria, glow. What was special about this green fluorescent protein, or GFP, was that it could glow on its own -- you only needed the one protein to get the glow. Once they found this out, scientists started putting it into all manners of beast from bacteria to yeast to plants and animals to make them glow. Since all living things use the same genetic code, a gene from bacteria or jellyfish can work in mammals. If we think of a gene as a recipe, this means that all of the words in the recipe are the same. In keeping with the recipe analogy, the only major difference between all of these organisms is in the punctuation. While the words are the same, how to tell when a new sentence should begin is different. In other words, different organisms have different ways of telling the cell to start making RNA from a gene. Scientists needed to break this "punctuation" code to get foreign genes to be read. Once broken, all a scientist needed to do to make a glowing fish was to change the punctuation of the GFP gene from jellyfish to zebra fish. The rest was pretty easy. We now have glowing mice, rabbits, fish, bacteria, yeast and even human cells! Beyond being pretty, the glowing proteins have revolutionized biology. Biology suffered for a long time from not having an easy way to look at what is going on in a living cell. Often, the plants or animals being studied had to be dissected to figure out what was going on. Now with GFP, we can tell what specifically is going on in a cell, whether a gene is involved in making ears, turning on other genes (and which genes it turns on), fighting off infection, etc. All thanks to a little jellyfish from Puget Sound...

A BBC article about Glofish
All about GFP