The Evolving Genetics of HIV

People can be infected with many different bacteria and viruses -- but some people get more sick from these bugs than others. Do our genes cause some of that difference?

The answer is yes--different versions of important genes change how easy it is for a person to be infected. The study of these genes might lead to new drugs to block or slow down an infection.

Since the 1980s many people have been afflicted with AIDS, caused by the virus HIV (human immunodeficiency virus). However, not everyone who is exposed to the virus gets sick. Scientists have carefully studied people who seem resistant to HIV infection. What's going on?

The answer comes from an understanding of how HIV interacts with our cells. HIV, like all viruses, can't make new copies of itself without help. It needs to enter cells and use their machinery to reproduce and spread throughout the body.

HIV can only enter certain cells. How does it find the right cells? By special proteins called receptors.

Receptors sit on the outside of cells to receive messages and transmit them into the cell. HIV grabs onto cells that have a receptor called CD4.

Cells with the CD4 receptor are an important part of the body's system for fighting all diseases (our immune system). HIV gradually destroys these cells and cripples the immune system.

It turns out that CD4 isn't enough. Another protein called CCR5 is needed as well. CCR5, called a co-receptor because it works with CD4, is the door that opens to allow HIV to enter the cell.

Many people who are resistant to HIV have a mutation in the CCR5 gene called CCR5-delta32. The CCR5-delta32 mutation results in a smaller protein that isn't on the outside of the cell anymore. Most forms of HIV cannot infect cells if there is no CCR5 on the surface.

People with two copies of the CCR5 delta32 gene (inherited from both parents) are virtually immune to HIV infection. This occurs in about 1% of Caucasian people.

One copy of CCR5-delta32 seems to give some protection against infection, and makes the disease less severe if infection occurs. This is more common, it is found in up to 20% of Caucasians.

Should everyone be tested for this mutation? Not necessarily. It would be dangerous to assume you are completely safe from infection if you have the CCR5-delta32 mutation.

It's not an airtight guarantee of never getting AIDS. Some unusual types of HIV can use other proteins for entering cells. Rarely, there have been people who have two mutant CCR5 genes who have died from AIDS.

Also, CCR5 is not the whole story of immunity to HIV infection. Some resistant people have been found who have two perfectly normal copies of CCR5. So other genes also contribute to slowing down HIV infection, and scientists are busy trying to identify them.

The usefulness of this work is mainly in how it helps us understand how the virus works and points to new possibilities for drugs to treat infection.

A new kind of drug?

Medicines against HIV work by gumming up some part of the infection process. If the virus can't get into cells, or can't make new virus, then the infection would be stopped.

Can blocking CCR5 stop HIV? Scientists are working hard to find out. Drugs are being developed that barricade the CCR5 receptor so HIV can't use it. This thwarts the virus as it attempts to enter a cell.

However, there are many things that could go wrong. One danger is that blocking one of our own proteins to stop HIV infection might weaken our immune system.

A drug to block CCR5 may have bad side effects and make people sicker. Fortunately, this is unlikely since people lacking CCR5 seem perfectly healthy.

But blocking CCR5 is still unlikely to be a miracle cure. Why not? The reason for this lies in the special properties of HIV's genes.

Most living things carry the instructions for making themselves in DNA. HIV (and a few other viruses) uses a related molecule, RNA, instead.

To make new virus, this RNA has to first be copied into DNA. The HIV virus carries its own unique protein for this purpose, called reverse transcriptase. (It carries out the reverse of the usual process of copying DNA to make RNA.)

The reverse transcriptase of HIV is very sloppy when it copies the genetic instructions. It makes lots of mistakes so that random changes frequently appear in its genes. The new viral offspring are now slightly different from the original.

Some of these viruses might not work at all. But some might work better, or infect cells in a different way.

So a form of evolution occurs -- Darwin's 'survival of the fittest'. Some of these changed viruses can evade the immune system and the drugs given for treatment.

This is how the virus becomes resistant to drugs--most viral particles are stopped by a drug but some have a mutation that lets them survive and reproduce.

How can the virus enter cells if CCR5 is blocked? A mutant virus could use a different co-receptor to get in. In fact this happens during the normal course of infection.

CCR5 is used during early stages of infection when the HIV virus is spreading slowly. Later on the virus evolves to use a different co-receptor called CXCR4 and that's when people get more sick.

But, the virus might not be able to easily mutate around a blocked CCR5. If the virus can't get into cells, then very few new viral particles would be produced. This greatly decreases the chance of a mutant form being created that doesn't use CCR5.

It's like throwing darts while blindfolded. Most darts would miss the bull's eye unless you got very lucky. However, if you throw a whole lot of darts, there's a greater possibility of hitting the target just by chance. 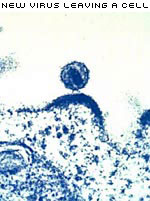 Where did CCR5-delta32 come from?

In some groups, the CCR5-delta32 mutation is found in a curiously large number of people (up to 20% of Caucasians have one copy). Could there be some advantage to having this mutation?

Well, the HIV epidemic is too new to have caused so many people to have the mutation. Also, a high frequency of a resistance gene would be expected in the region where infection rates are high. However, it's virtually absent in African and Asian populations.

Why is the CCR5-delta32 mutation so frequent in Northern Europe? It is possible that this gene provided resistance to previous epidemics.

If true, people with CCR5-delta32 mutation would have been more likely to survive and pass it down to their offspring. At the same time, there is a relative decreased survival of people with normal CCR5.

Two different deadly diseases were widespread in Europe when this mutation is believed to have arisen. Resistance to bubonic plague (also called the Black Death) might have influenced CCR5-delta32 distribution. Recent findings name smallpox immunity as another strong possibility.

Smallpox affects younger people than bubonic plague, which has a more potent effect on which genes get passed down to offspring. Also, the type of virus that causes smallpox uses receptors such as CCR5 and CXCR4 to enter cells.

As you can see, the genes of both people and the bugs that infect us change through evolution, though at very different rates. Human evolution doesn't occur fast enough for CCR5-delta32 to help people soon be widely resistant to HIV.

The very rapid evolution of the HIV virus makes it extremely difficult to treat. But, scientists are pursuing all avenues to learn new methods to impede infection.