New clues to why our hair turns gray

Aging is a process that eventually affects all of us. We can all point out the signs of aging like wrinkles, getting shorter, and gray hair. However, how and why we age is still mostly unknown to the scientists who study the process of aging. There are two current theories of aging. The first is that our genes determine how long we live. The signs of aging and the end of life are programmed in our DNA. The second is that our cells and DNA wear out and get damaged over time eventually leading to the end of life. Studying the signs of aging can help us distinguish between these two theories. Knowing the mechanism of aging could some day help us change the way we age. If genes are involved, then gene therapy may someday help us treat the signs of aging. If the amount of DNA damage determines how long we live, then maybe we could protect our DNA somehow to live longer. If we can find genes involved in some sign of aging, then the first theory would be supported. If we can find damage to the DNA or cells dying as we get older, then maybe genes are not involved in aging. Graying hair is an obvious sign of aging that can be studied. To understand gray hair, we first need to go over some basic hair biology.

Hair grows from follicles in our skin. Follicles are pit-like structures with layers of cells with different jobs. At the base of the follicle is a bulb, from which the actual hair that we see grows. Hair color comes from a protein called melanin. The cells in the hair follicles that make melanin are called melanocytes. There are two kinds of melanin. Eumelanin colors hair brown to black and pheomelanin colors hair yellow-blond to red. The amounts of eumelanin and pheomelanin produced by your melanocytes determine your hair color. If you're a brunette, you have lots of eumelanin, a redhead, lots of pheomelanin. And when your hair turns gray, you've stopped making either. Hair not only gives us a way to make a fashion statement, it has important functions for the body. It keeps us warm and can protect the skin from being damaged by ultra violet light from the sun or scratched. Eyebrows and eyelashes keep dust and debris out of the eyes and nasal hair keeps dust out of the lungs. In our society most of us worry about the hair on our head. We spend a lot of time and money washing, cutting, styling, curling, straightening, coloring, and worrying about the amount and condition of our hair. It is no wonder that our hair turning gray is of such interest.

What can mouse stem cells tell us about graying hair?
So what makes our hair turn gray? Believe it or not, scientists don't yet have an answer for such a simple question! They used to think that melanocytes destroyed themselves in the process of making melanin. When melanocytes make melanin, they also make some toxic waste products. Over time these toxic chemicals could build up and damage or kill melanocytes. Work done by three scientists from the Harvard Medical School and the Hokkaido University Graduate School of Medicine in Japan has thrown this theory into doubt. Their work came up with another idea -- that stem cells are involved. Stem cells? Aren't those the cells that might cure disease one day? One and the same. Turns out that those special cells that make hair color pigment (melanocytes) come from stem cells. There is a pocket that houses melanocyte stem cells halfway up the follicle, above the bulb. These stem cells turn into melanocytes when old melanocytes die off. So what do stem cells have to do with gray hair? Remember, gray hair happens when hair no longer has any melanocytes. No melanocytes, no melanin, gray hair. The idea is that you need stem cells to make new melanocytes. For some reason, over time, maybe the stem cells aren't able to replace melanocytes like they could before. Using mice, the researchers showed that melanocytes don't die off because they make melanin. They also showed that as mice get older, they have fewer melanocyte stem cells until finally, when a mouse gets gray hair, they have none. And finally, they showed that as people get older, they have fewer and fewer melanocyte stem cells. The researchers decided to use mice to test their ideas because mice have hair follicles very similar to ours. Their hair also turns gray as they get older. The researchers first looked at albino mice. Albino mice do not make melanin but have melanocytes. So, if an albino's melanocytes disappear over time, it can't be because of poisons from making melanin. And this is just what the researchers found. Albino mice lose their melanocytes even though they don't make melanin. OK, that showed that the old theory was in trouble. But is the loss of stem cells the reason for the lost melanocytes? Looks like it might be. The researchers found that stem cells in young mice divided and made new melanocytes. But in old mice, it was a different story. The older a mouse got, the fewer stem cells it seemed to have. At some point, there were only melanocytes and no stem cells. How could they explain this? If for some reason, stem cells started turning into melanocytes faster than making new stem cells, this is the kind of result you'd get. Eventually you'd run out of stem cells and have only melanocytes. Once they died off, there would be nothing to replace them. No melanocytes means no melanin and gray hair. OK, but what about people? Finally, the researchers looked at human hair follicles. Humans have immature melanocytes similar to mouse melanocyte stem cells in their hair follicles. They looked at the hair follicles of young, middle aged and elderly people. They found that young adults have a high number of immature melanocytes. However, middle-aged people have fewer immature melanocytes and they are totally missing in the elderly. The results in mouse and human studies show that as we get older, stem cells in our hair follicles stop making new melanocytes. Since there are no more melanocytes to make the color pigment melanin, our hair turns gray. While these are interesting results, they are only an observation. They don't explain why stem cells in the hair follicle cannot maintain themselves in old age. We still haven't answered the question of whether aging is programmed in our DNA or it is due to our cells getting older. Maybe our stem cells are programmed by our DNA to begin to die at a certain time. However, these results bring up an idea for the other signs of aging we see in human bodies. Our bodies have many populations of stem cells that divide into cells with different jobs. If all our stem cells stop maintaining themselves as we get older, this could explain the other signs of aging we see in our bodies. *Used with permission. Illustration by Diane Burk, from "Better hair through Chemistry" by Pat Murphy, Exploring Hair Magazine, Vol. 22, No. 2, Summer 1998, Exploratorium, San Francisco, California.

This melanocyte came
from a stem cell 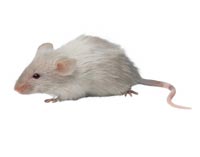 Mice can teach us
a lot about aging