The Genetics of Mating

"Boys will be boys", or so the saying goes. But are typical boy (or girl) behaviors programmed in our genes? Or are they learned? Those tough questions are a long way from being answered in humans. But maybe not so far in the "simple" fruit fly, Drosophila. A single gene may determine whether a male fruit fly is interested in males or females. At least when it comes to his courting.' We're all born with certain behaviors. Babies cry for food or suckle with no training. Other behaviors, like riding a bike, are learned through observation and practice. Behaviors known from birth, without training, are most likely to be determined primarily by genes. How genes control behavior is not very well understood. Scientists are trying to understand how genes control behaviors in simpler animals to get ideas about how it could work in more complicated ones. When male flies come in contact with females, they perform a very unique song and dance'. This shows his interest and attracts the female's attention. Normal female flies never do this routine. This courtship ritual of the fly is an inborn behavior. All males can do the same routine without seeing other flies do it. And the behavior doesn't change much through learning or in different environments. How could a gene make male courting behavior happen? We can think of a behavior as a response an animal makes to a need or something in its environment. First, the gene has to set up a way to tell if a female is around. Also, the female detector has to be connected to the muscles that produce the courtship dance, song, and other movements. Is there a single gene that can do all this? One gene that looks promising is the Fruitless (fru) gene.

When a male fly's Fru gene is defective, he no longer has any interest in females. He won't dance or sing for them. What makes Fru so special is that it has such a specific effect when it is broken. Mutating it changes the fly's mating behavior without changing anything else. This is unlike a fly having 2 left feet because of muscle defects. A genetic problem with muscle formation would affect all movements and not just those of courting. Further studies showed that there are male and female forms of Fru. If Fru was really the master of ceremonies for courtship ritual, then we would predict that a male with a female Fru would act female and a female with a male Fru would act male. And that is exactly what happened. If males make the female form of Fru they lose interest in females. Female flies that make only male Fru flirt with other females and show male courting behavior. This showed that a single gene could generate a behavior. But what is Fru doing? Scientists aren't sure. They found that Fru is made in sets of nerve cells found in sensing organs, the brain, and connecting to muscle. These neurons most likely form an intricately connected circuit to direct courting behavior. Surprisingly, the identical nerves, in the same locations, are in female flies too. So, Fru does not cause the anatomy of the nervous system to be different in males versus females. Instead it changes how those nerves function. The details of how this happens are still being worked out.

The scent of romance-in our genes?
What triggers a male fly to begin his courtship dance? Is it the sight of a svelte and sinuous female or something else? You might have heard of pheromones, those airborne chemicals rumored to trigger passionate desire. It turns out that pheromones, more than visual signs, have a powerful effect on Drosophila courtship behavior. As mentioned above, the Fru gene is made only in special groups of cells, including nerve cells of the brain and sensing organs. One set is in the fly's primitive form of nose. "Nose" cells that make Fru let the animal smell other flies. Especially smells that identify another fly as an eager-to-mate member of the opposite sex. Turning off Fru only in those special nose cells of a male fly reduced his courtship behavior. And when the male Fru gene gets turned on in the female's nose, she starts acting more like a male. Sounds like maybe something the flies are smelling is triggering the courtship dance. To test whether pheromones were to blame, scientists went a step further and created male flies that made female pheromones. These are males that smell female. They then put these flies together with females that made male Fru. In other words, males that smell like females were put together with females that like the smell of females. And, as you'd expect, the females started courting the males! Females pursuing males represents a complete reversal of the sex roles for fruit flies. So for the simple fruit fly, a single gene can change the gender preferred for mating. What about more complicated animals? Do the findings for Fru relate at all to more complex animals? So far, there is no Fruitless gene known of in humans or other mammals. But there do appear to be genes that are involved in some of the same behaviors. For example, in mice, pheromones help males tell males from females. This is important for knowing if they are encountering a potential mating partner or a mating rival. An important clue to figuring this out was the TRP2 gene. The TRP2 gene is important for detecting a pheromone and passing that information along. Male mice that lack this gene aren't aggressive towards other males. And they try to mate with both males and females. 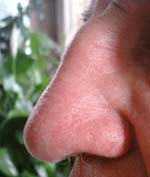 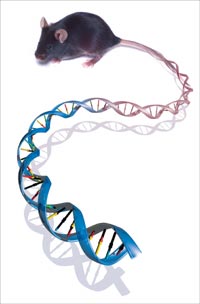 Of man and mating
OK, that's in mice and flieswhat about people? The Drosophila experiments might lead you to wonder whether homosexuality in people could be due to a gene like Fruitless. In fact, its very unlikely to be caused only by a person's genes. How do they know that? Scientists try to estimate how much genes influence a trait by studying twins. Identical twins have the exact same DNA. If homosexuality was entirely due to genes, then sexual orientation would always be shared in identical twins. This is not the case. However, the twin brother of a gay man has a bigger chance of also being homosexual compared to the rate found in the general public. (Similar results were found in twin studies of lesbians.) Scientists have estimated that ~40% of homosexuality is due to the influence of genes. So far, no specific genes have been identified that contribute to homosexuality. Most likely, complex interactions between many genes and the environment influences a person's sexual orientation. What about pheromones? Could genes that help detect pheromones be affecting sexual orientation? It is possible, but unknown. We don't know what role those invisible chemicals play in sparking people's attraction to one another, even with all those promising potions being sold on late-night television. It is possible that genes similar to Fru act during human development. They may help set up the basic nerve cell circuits that can direct behaviors. And unseen airborne chemicals may enhance relations between people. But, people's mating is different from the fruit flies. Many specific aspects of our courting behavior change with experience and environment. And these will vary from person to person. People have no single courtship dance. There are lots of ways of attracting mates that change depending on who and where you are, where you're from, etc. A successful pick-up line may be used regularly by a striving suitor, while something that turns the girls away will be exchanged for something better!