Thanks in part to the humble worm, C. elegans

Scientists in their 40's don't usually win a Nobel Prize. Unless it is for something really important. Like RNA interference. Never heard of it? That isn't surprising. It doesn't have a very catchy name but it explains a lot about biology. And may end up curing diseases like AIDS and cancer one day. Andy Fire and Craig Mello shared the Nobel Prize in medicine and physiology this year for their work on RNA interference in the lowly worm, C. elegans. This story shows how someone can use a simple worm to make scientists completely rethink how we use our own DNA. Which all goes to show that basic science is important. When you hear of a story about a scientist studying cancer by looking at brewer's yeast, don't scoff. We've learned a lot about how cancer works by looking at yeast. And if someone says they want to understand us better by looking at a worm, listen to them. They just might win the Nobel Prize
What is RNA interference?
RNA interference is this wonderful process no one could have predicted. Until just a few years ago, everyone focused on proteins and how important they are for running a cell. But they ignored RNA at their own peril. Here's the old story. Our DNA has genes and genes are simply instructions for making proteins. These proteins then do most of the work in a cell. To simplify things, let's think about a cell like an ant colony. The queen ant supplies all of the eggs for making the ants that do the colony's work. Her eggs hatch into workers, soldiers, food gatherers, etc. Our DNA is like the queen. It is responsible for making RNAs that "hatch" into proteins that do the cell's work. Proteins like hemoglobin that carry our oxygen or all the proteins of our immune system that fight off disease. The needs of the colony dictate how many of each ant there are. And where the ants are stationed. A colony full of soldier ants would not last long without enough ants to get food. Nor would the colony last for very long if the soldiers were tending the aphids or the fungus farms. Our cells need to watch out for the same sorts of things. We need the right amount of each protein in the right place in order to work right. Too much or too little of certain proteins can lead to many problems including cancer, albinism, PKU, etc. The cell figures out how much of each protein to make in a couple of different ways. For example, there are certain proteins called regulators that tell cells how many copies of RNA to make from a gene.

This would be like ants telling the queen how many of each kind of egg to lay. The queen would then lay the right eggs for the colony. There is another way to end up with the right amount of proteinsRNA interference. Instead of proteins, RNA interference uses other RNAs to determine how much of a protein gets made. This is what Andy Fire and Craig Mello won their Nobel Prize for. As I said, everyone was fixated on proteins before. But here was a case where RNAs were doing the work, not the proteins. With RNA interference, the RNA that will "hatch" into a protein gets made. But on the way to the protein factories, RNA interference can target this RNA for destruction so that less RNA gets translated. Less RNA makes it to the ribosome so less protein gets made. This is more like the queen ant laying eggs and other ants destroying unnecessary eggs before they hatch. The RNAs used by RNA interference are tiny. They're so small they are called microRNAs (miRNAs). What miRNAs do is stick specifically to a certain RNA that is going to be made into protein. When the cell sees these two RNAs stuck together, alarm bells go off and the RNA is chewed up. No RNA, no protein. As I said, Andy Fire and Craig Mello discovered this process in worms. And then scientists found it in people too. We now know that this is a process found throughout the plant and animal kingdoms. This work is so important for at least a couple of reasons. First, it is RNA and not proteins that do the regulating. This finding has made available all kinds of tools for understanding our biology. And has opened up new avenues for finding cures to many different illnesses (see below for an example). Second it shows another important area for regulation. I can't emphasize enough how significant this all was. Scientists were a bit like the men trying to describe an elephant by sticking their hand through a hole and touching just one part of the elephant. What Andy Fire and Craig Mello did was tear down the fence so we could see the whole elephant. Well, that is an exaggeration as there is probably a lot more to learn. But they at least made the hole in the fence bigger. This is all still pretty new and we are still trying to figure it all out. We don't know how many of these miRNAs we have or all of what they're doing. Recent work suggests that there are perhaps 10's of thousands of these things scattered throughout our DNA. So they're probably doing lots of important things. Now that they know that miRNAs are there, scientists can study them in detail. And get us one step closer to understanding how we work. 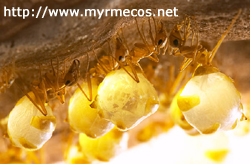 These ants are like specialized
proteins in a cell 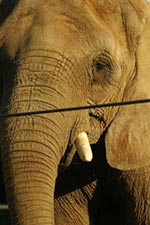 Fire and Mello's work
helps us to better
understand ourselves
RNA interference and AIDS
Let's talk now about how this finding might result in new medicines. As an example, consider AIDS. AIDS is caused by a virus called HIV. HIV is a special kind of virus called a retrovirus. A retrovirus starts out "life" as an RNA. Once it gets into a cell, the RNA is turned into DNA which can then make new virus. Because HIV starts out as an RNA, it is a wonderful target for RNA interference. The idea is to have someone make microRNAs (miRNAs) that stick to the RNA of HIV and target it for destruction. Simple. Not so fast. There are lots of problems here. You need to get the miRNA into the cell. You need to have the miRNA remain effective over time. And you need for the miRNA not to be harmful. The last one is the easiest. There are lots of miRNAs that will work against HIV so you can find the ones that are not harmful. But how do you get the miRNAs into the cell? You can't just eat an miRNA or inject them into the blood. Our body hates RNAs that it doesn't know (they could be viruses). So the body quickly chews them up. Scientists are working on creating RNAs that the body can't destroy. But they haven't found one yet that is effective enough to use as a medicine. Gene therapy is another possibility for getting RNA into a cell. This is where a doctor infects you with a harmless virus that makes the RNA you want. In this case, a harmless virus would be used to destroy a harmful one. Gene therapy has not been effective so far. It is hard to get the virus into every cell. The body also tends to shut the virus down (the body doesn't know the virus is trying to be helpful). And sometimes where the "harmless" virus lands in our DNA can cause problems like leukemia. So this problem hasn't been worked out yet. What about the miRNA remaining effective over time? This is a problem with HIV because HIV is constantly changing. This is why current drugs stop working after a while. The RNA of HIV changes so that the drug won't work anymore. A changing RNA causes problems for miRNA too. The way a miRNA works is that it sticks to a certain sequence of RNA. For example, imagine an RNA with the sequence UAGC (real miRNA binding sites would be 20 or 25 long). A miRNA with the sequence AUCG can stick to this RNA. (Remember, U and A stick together and so do G and C.) It is important for all of the bases to line up for RNA interference to work. Now imagine that a new strain of HIV appears by chance with the sequence AAGC. This one doesn't match up and so is probably resistant to the miRNA we've made. If it is resistant, then this version of HIV can now can spread. The miRNA we've designed will no longer be effective and this patient will develop AIDS. The way around this problem is to use many miRNAs. Sort of like combination therapy is used now to treat AIDS. Combination therapy uses different medicines all at once. These medicines target different parts of HIV. The idea is that it is hard to become resistant to many medicines all at once. For example, if HIV becomes resistant to a protease inhibitor, it can still be killed off by a fusion or reverse transcriptase inhibitor. The reason for this is that it is very unlikely that an HIV will happen that has the three changes all at once. If each change is a 1 in a million chance, then the chances of all three happening at the same time is 1 in a million cubed or 1 in a quintillion or so. This is so unlikely that it won't happen. The same idea is being tried with interfering RNAsuse lots of them against different parts of the HIV RNA all at once. The odds are very unlikely that a resistant strain will develop against all of these RNAs all at once. We clearly aren't at a cure yet using RNA interference. But this whole avenue of research would not have been possible without the work of Andy Fire and Craig Mello. In other words, we wouldn't have known about this approach without their work. A whole new class of medicines may now become available because of some basic research done on a tiny worm. No wonder they won the Nobel Prize!

HIV starts off as an RNA.
This makes it an excellent target
for RNA interference. 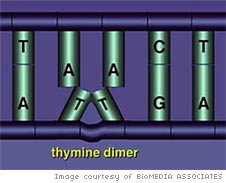