Scientists Repair a Gene in a Human Embryo. Or Did They?

Other less exciting explanations may call the results into question 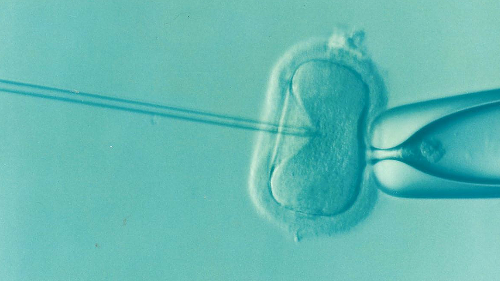 Scientists from Oregon recently reported that they had fixed a gene in human embryos. Click here to get the details on how they did it and why it is such a big deal.

Other researchers are now questioning whether they actually did fix the gene as well as they said they did. Or even at all.

No one is saying these researchers were trying to hoodwink anyone. If researchers show that the gene wasn’t fixed, then most likely the reason will come down to a misinterpretation of data.

These things can happen with complicated experiments! Their data was consistent with the gene being fixed but they did not consider more likely alternative explanations.

Whether they actually did get the gene fixed in the way they said they did has profound implications for curing genetic diseases in the future. Which is why it is so important they explore all of the possible other reasons they might have got the result they did.

Luckily science being what it is the researchers are now looking into it. We’ll have to wait and see whether they did what they said they did.

A Big Deal If True

Before diving into why they might be wrong, let’s take a step back and see why this paper was such a big deal.

Of course it is a big deal because they successfully fixed a gene in an embryo. This might mean that future children will be spared certain devastating genetic diseases.

Other researchers had managed to fix a gene in an embryo but they could never get the gene fixed in every cell. Some cells had the fixed gene and others did not.

These “mosaic” embryos can be a problem because the genetic disease might still happen once they develop into babies. Not enough cells had the fixed gene.

These researchers got around this problem by fixing the gene in a fertilized egg. They could focus only on those fertilized eggs with a fixed gene. Since every cell and all the DNA of a person comes from that single cell, every cell in the embryo will have the repaired gene.

The researchers also found that a fertilized egg edits its genes a little differently than do other cells.

Normally when fixing a gene, a scientist has to give the cell a copy of the fixed gene. This gives the cell something to use to fix the gene.

The fertilized egg didn’t seem to need the added fixed gene. Instead, unlike other cells, it used its own DNA to fix the broken gene.

(In this particular disease, each cell had a working copy and a broken copy of the gene. The cell used the working copy to fix the broken one.)

It is this last point that throws up a red flag about the interpretation of this experiment. Because of how DNA is organized in a fertilized egg, it is hard to imagine how a cell could use its own working copy of a gene to fix its broken one.

Never Shall the Twain Meet

If you know anything about a cell, a fertilized egg is a little weird.

Most cells have the vast majority of their DNA stored in one place—the nucleus. A fertilized egg is different. Its DNA is stored in two separate places. Scientists call these pronuclei.

So in a fertilized egg (including the frozen ones they used in this study), mom’s DNA and dad’s DNA are separated from each other. There is no easy way to get them close to each other until the cell has divided into two cells.

This matters because dad is supplying the broken gene in this experiment and the researchers claim the cell is using mom’s DNA to fix it. But for that to happen, the two DNA’s have to be near one another. And in a fertilized egg they are not.

If the results of this study are true, the experiment is actually telling us something we didn’t know about human DNA in a fertilized egg. There is some way for the DNA of mom and dad to communicate and pass information.

That is such a big deal that these researchers needed to rule out other possibilities before claiming something this big. They did not but a group of scientists recently proposed some other reasons the results may have turned out like they did. And this is without a gene being repaired.

In the next section I will go over one of the possible reasons the researchers might have misinterpreted their data. If you are interested in additional ones, please check out the paper. 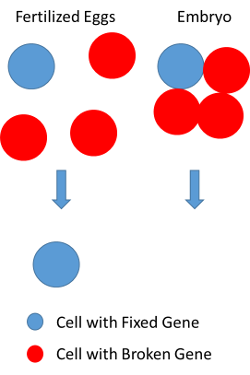 As you can see, with a fertilized egg it is easy to separate the cells with the fixed gene from the ones with the broken ones. With embryos, where all the cells are stuck together, that is much more difficult. 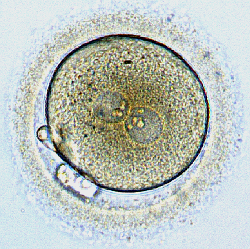 Instead of a single nucleus holding a cell's DNA, a fertilized egg has two pronuclei. (NinaSes)

The gene-editing tool they used is called CRISPR/Cas9. Cas9 goes to a specific spot in our DNA and cuts it. In this case that spot was in the middle of a broken gene.

Things don’t always go so smoothly. Cut DNA is dangerous to a cell so it immediately sets out to fix it whether it has DNA to use as a copy or not.

In fact, human cells are so freaked out that they often just stick the two cut ends back together again. And they aren’t that careful.

In its haste, a cell will often lose some of the DNA around the cut. Sometimes it can lose more than just a little.

This is where the researchers might have misinterpreted their data.

When they checked to see if the gene was repaired, they used a method that counts on there not being too big a loss or deletion of DNA. This is not that uncommon a technique to use.

There is too much DNA to sequence it all in every experiment so what scientists often do is choose which bits to sequence.

Let’s say this is the DNA we are sequencing:

I have just drawn it as a blue rectangle.

Remember, we have two copies of most of our genes, one from mom and one from dad. In this case we have a working copy and a broken copy:

I have given the broken copy a red box with an X through it to show where it is broken.

The way sequencing works is they add tiny pieces of DNA called primers that stick to either side of the DNA you want to sequence. Something like this:

The primers are the little arrows. Each DNA has a primer at one end and a primer at the other end.

Scientists will only be able to see the DNA between the two arrows. They will get something like this: 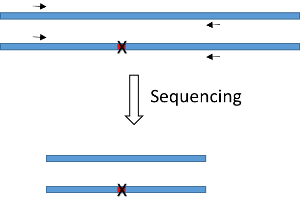 They only have the DNA in between.

As you can see, you end up with two different sequencing products. One has the working gene, the top one, and one has the broken gene, the bottom one.

If the gene was repaired, the process would look like this: 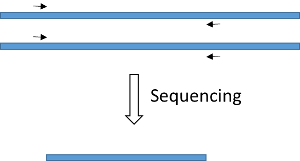 Since both copies are the same, you get the same results from both. The fixed gene and the working gene are indistinguishable in this case. You only see evidence of a working gene which you interpret as the gene having been fixed.

Let’s say that instead of using a good gene copy to fix the broken gene, the cell just deleted a good chunk around the broken one. You might get something that looks like this:

Here the bottom copy, the broken one that Cas9 cut, has a chunk of blue missing. The jagged line is the missing DNA and shows that the DNA at the far left, that little blue rectangle, is still part of a long piece of DNA.

We’ll say this is a reasonably good sized deletion.

Now when we sequence, one of the primers can’t stick (or bind) any more:

To work, you need primers on both sides but for the bottom gene copy you only have one. Here is what will happen when this is sequenced: 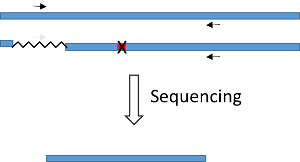 Now you can only “see” the good copy. This looks exactly like the case where the gene was fixed. This method of sequencing the DNA cannot distinguish between these two possibilities.

The researchers are now doing follow up experiments to see if this might be the explanation. They are undoubtedly also doing other experiments as well to rule out other possibilities.

If in the end it still looks like the cell used its own DNA to fix its broken gene, then we will have learned something about the DNA in a fertilized egg. Unfortunately, it will also make gene-editing a bit less useful for curing genetic diseases.

If embryos really work this way, then the embryo would need to have both a working and a broken copy of the same gene. It needs to have its own working copy to use to fix the broken one.

If embryos work the way this study suggests, then only a subset of genetic diseases, the dominant ones, will be able to be cured with gene-editing. Unfortunately there are many, many recessive diseases like sickle cell anemia or cystic fibrosis that can’t be fixed with this technique.

And even being able to cure dominant genetic diseases is less exciting than it sounds.

Right now there is a procedure called preimplantation genetic diagnosis (PGD) that does something similar with much less risk. With PGD a couple ends up with a number of embryos and they can select the ones that will not develop the disease. There is no need to tinker with the embryo’s DNA. 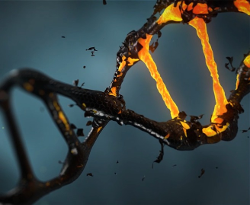 Cells hate cut DNA and will do most anything to get rid of it. (Max Pixel)