Typos in the Genetic Code: How Much Should They Matter?

Learning to interpret our genome during the genetics revolution 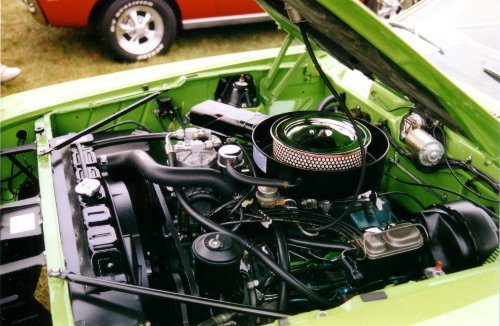 Unlike this engine, there are some seemingly important parts in our DNA that some of us are fine without. (Wikimedia Commons)

We like to think of our bodies as finely tuned cars, all our parts working together to keep us running. Just as you’d go to a mechanic to fix a broken car part, you’d see a doctor if something in your body isn’t right. And just as you’d want to know if the car you’re driving is in top shape, you’d be curious to know the same about your body.

A few years ago, reading our DNA - the stuff in our bodies that makes us who we are - was very costly and complicated. These days, it’s faster and down to a mere $1000. Soon, anybody might be able to see every small imperfection in his or her DNA – we could “catch” what might go wrong, and take action before anything happens.

But a recent study suggests that we’ll need to be careful about how we interpret our DNA. In this study, scientists found that many people live rather ordinary lives while missing genes that are involved in human growth and health. While it’s true that many genetic diseases do happen when a certain gene stops working, sometimes missing a gene or two won’t matter.

You wouldn’t want to take some drastic action based on your DNA results when you are missing a gene that doesn’t matter for your health. It’d be like paying extra money to fix a car part that you can do without. Telling which genes matter and which ones don’t might be harder than we thought…

The scientists in the study looked at the DNA of 3,222 adults. They found that 1,111 of them had at least one of 721 different genes that didn’t work. That is, around 1/3 of the people they looked at had a non-working gene (also known as a gene “knockout”).

To the surprise of these scientists, however, most folks with a missing gene seemed fine. According to health records, they didn’t seem to take medicine or to see their doctors more often than the average person.

There were even a few genes that should have had an effect when missing. According to previous research, these genes were knocked out in various genetic diseases. In this study, however, people without a working copy of one of these genes didn’t seem to have the disease.

The scientists were puzzled: Could it be that these people weren’t reporting that they were sick, or that they’d get sick later on in life? Could there have been problems with the previous research on genetic diseases? Or maybe there were problems with the machine they used to read the DNA, and they simply read the DNA wrong?

Focusing on one missing gene, they looked into another idea – maybe there are ways that we can compensate for losing a gene or two.

More than one way to get something done

Each of our genes does a specific job in our bodies. So there is a gene that helps our blood carry oxygen, another that helps us digest starch, and so on.

PRDM9 is a gene involved in making breaks in DNA. These breaks might sound dangerous, but they’re actually important for passing down our DNA to the next generation.

Before getting put into a sperm or egg, our DNA gets a bit mixed up, or recombined, to create a unique combination of traits for the next generation. This can only happen if the DNA gets breaks in it first.

One person in the study lacked a working copy of PRDM9. Scientists wanted to see whether this changed how her DNA got recombined before it was passed on. They did this by looking at the DNA from both this person and her child, as well as from a mother-child pair with working PRDM9 genes.

What they found was more complicated than they’d expected. Surprisingly, the parent with the PRDM9 mutations could still pass on her DNA, and it was recombined. However, the recombination happened in different, and unexpected places compared to what usually happens in people.

What does this mean? Well for one, it suggests that we’re a lot more versatile than we give ourselves credit for. When we have a mutation in a gene that’s important for survival, there might be ways our biology makes up for it.

And maybe the same is true for other genes, explaining why the people in the study with gene knockouts were healthy. This is interesting by itself, because it could open up new questions about how our bodies adapt. But it’s also an important finding because it suggests that we’ll need to be careful about how we read our sequencing data in the near future.

So should I get my genome read? Learning the pros and cons 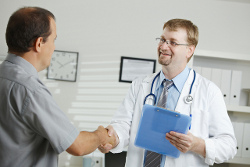 As the information in our DNA becomes cheaper to get, doctors will have to know what to do with it; some people can be healthy with missing genes. (Vic) 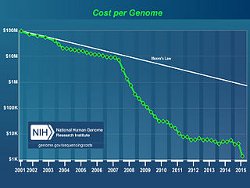 The cost of reading our entire DNA, our “genome,” is going down, because the tools required for it are getting better. Look how expensive it used to be! (Wikimedia Commons)

Finding Needles in a Haystack

As I said before, these researchers found 781 different gene knockouts in the 3,222 adults they looked at. What I didn’t tell you was that 422 of these genes had never been seen as not working, or “knocked out,” in people before.

Turns out it’s actually pretty hard to find gene knockouts. We have two copies of each gene, and very often, both copies need to have mutations for the gene to stop working. The chances of both copies being mutated are quite low.

To get around this problem, these scientists looked at the DNA of people who were born from consanguineous marriages – marriages between parents who are closely related. So closely related, in fact, that many of these parents were first cousins. Their family might look a little like this: 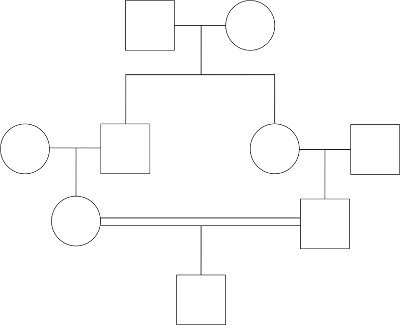 In this drawing, squares are men, circles are women, and a horizontal line between a square and a circle shows them having children. The children are then drawn in the row below. The double lines show a consanguineous marriage, and here the marriage is between first cousins.

Consanguineous marriages make it easier to find rare gene knockouts. Let’s see what might happen if one of the early family members has one copy of a mutated gene. 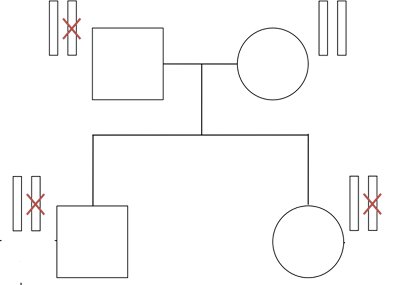 Here I’ve drawn the mutated gene with a red X. When we have kids, we pass down just one copy of each gene to each child.

In this case both his son and daughter happened to get it. They are fine, though, because their other copy works.

BUT, these children might pass on the non-working copy to their children just by chance like this: 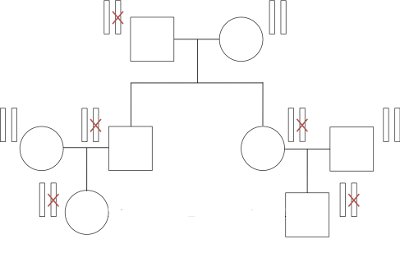 And now, if the two first cousins get married and have children, there is a chance that they might both pass on a mutated gene like this: 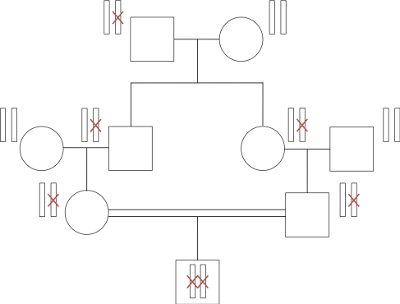 Each of their kids has a 1 in 4 chance of having two mutated genes. Here their son was the 1 in 4.

This still seems like a small chance, but it’s a lot larger than what would happen if these cousins were to marry other people. You’d be banking on the odds that these other people have the same rare mutation or a non-working copy of the same gene. What’s more likely going to happen is this: 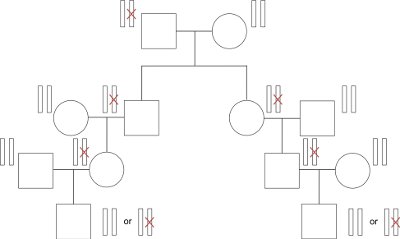 Now it becomes harder to make a gene “knockout.” The children in the last row will have to pick up a working copy of the gene. And as long as they have either two working copies or one working copy, they’re fine.

So finding new “knockouts” that have never been seen before is not very easy! The researchers in the study hope that others will take their approach to learn more about human genetics and how our bodies deal with missing genes. 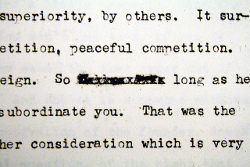 A mutation is a little bit like a typo. Just like a typo could change the meaning of a word, a mutation could change how a gene does its job. But maybe our bodies have adapted to overlook some “typos” in our DNA. (Quinn Dombrowski)